2017, November 1: It was great news for Bermuda in December last when it was officially announced that the country had won its bid to host Americas Cup 35. In so doing, Bermuda has become only the sixth country in history to host the world’s oldest international sport event.

The other five are the USA, Great Britain, Australia, New Zealand and Spain. Indeed, the Americas Cup is older than the modern Olympic Games.

Bermuda came out ahead of three other venues that had put in bids. Newport, San Diego and Chicago would have been caught by surprise at the announcement not only because Bermuda seemed to offer so much less for this global event; the defending champion is the USA team.

So, why Bermuda?  It is small in size; has relatively little by way of visitor accommodation; and, located a remote 600miles from everywhere.

For a starter, Bermuda is steeped in sailing tradition. And, for more than a century has been involved in international yacht races. The biennial Newport Bermuda Race has been going since 1906. According to one account, in 1906 there was consensus about the idea that insanity best described any venture that had amateur sailors racing offshore in boats smaller than 80 feet. Thomas Fleming Day, editor of The Rudder magazine, apparently disagreed that sailing was inherently dangerous and initiated an ocean race from The Brooklyn Yacht Club in New York Bay down to the Royal Bermuda Yacht Club.

Regardless, the people of Bermuda were in celebration mode in welcoming their guests and the organizers of the event from all reports were happy with their choice of venue. Premier of Bermuda, Michael Dunkley, laid out the welcome mat for visitors and diehards travelling the world over to see some skillfull sailing from competitors fro  Sweden, New Zealand, USA, the UK, Japan and France. 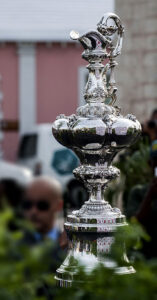 In the end, the Emirates Team New Zealand prevailed, winning all but one of the eight final races to be named undisputed winners of the of the 35th America’s Cup.

EVENTS IN 35th AMERICAS CUP in BERMUDA, Summer of 2017