Malcolm Maclean, an American businessman and transport entrepreneur, invented the modern intermodal shipping container and on April 26, 1956, the ss Ideal X, a converted tanker, sailed with 58 trailer vans, from Newark, New Jersey to Houston, Texas. This was the beginning of a new era and, as the saying goes, ‘the rest is history’.

Shipping containers, besides being convenient for quick, safe and easy handling, also effectively stopped pilferage of cargo. Theft had, up the then, been a serious problem when shipping breakbulk cargo.

Proper declaration is imperative for all cargoes.

In breakbulk, bulk or neo-bulk it is impossible to wrongfully declare as contents, quality and weight are visible to ship and shore personnel alike. However, in a sealed container, miscreants can and have wrongfully declared the nature of contents. 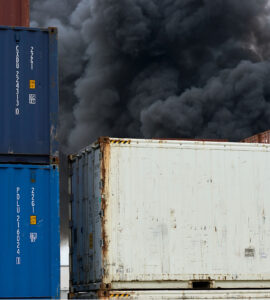 The purpose of proper declaration inter alia, is to assist the Master of the vessel to decide on optimum stowage. There are guidelines clearly stated in the International Maritime Dangerous Goods (IMDG) Code on how dangerous goods should be carried. The main advice here concerns distance apart for incompatible substances and ventilation.

Then there is the problem of weight misdeclaration. This can have a serious effect on the ship’s stability, especially smaller vessels. For example, a vessel of 15,000-teu. capacity could conceivably have an additional 15,000 tonnes on board if each container is mis declared by one tonne. This is why cargo ports must assist the supply chain by weighing all full containers before loading. This will ensure that the declared weight is correct. And, they must also have punitive fines of a magnitude that will stop exporters from misleading reporting.

The problem seems to be getting worse. More than 20 major fires have been reported since mid-2012, according to Roanoke Trade, a cargo insurer. In 2019, some serious fires were reported on six on container vessels, including: Yantian Express, APL Le Havre, Grand America (lo ro), APL Vancouver, ER Kobe and KTMC Hong Kong.

In most cases the official investigation concluded that the likely cause of the fire was mis-declared or undeclared hazardous cargo. There may be genuine cases of administrative error but there is the also the ongoing problem of shippers seeking to avoid the higher freight costs attributed to dangerous goods.

Changes to IMO SOLAS Regulations (on June 2016) required that all newly built container ships, in addition to existing regulations, must be fitted with at least one water mist lance and mobile monitors. This has not had the desired effect. Classification Societies and P&I Clubs are convinced that fire protection is in adequate.

Fire-fighting systems have developed over time to ensure that crew are able to ensure their safety, and thereby comply with International Convention for the Safety of Life at sea (SOLAS) requirements. However, firefighting capabilities on board have not kept up with the dramatic increase in container ship sizes. This is evident reviewing the development of container ships.

In 1968 the Encounter Bay was deemed to be a very large ship, carrying 1,530 teu. Fifty years later, in 2019, the vessels have crossed the 25,000 teu threshold. Yet, vessel construction rules, as regards firefighting, etc., are yet to address this reality.

Today’s container ships are huge and carry a greater variety of cargo in larger quantities. According to Avalon Risk Management: “…that means more containers carrying hazardous materials are likely to be onboard. The widespread and well-documented problem of incorrectly declared and improperly packed and secured shipments of dangerous goods also increase the risk of fire”.

Added to this is the shrinking size of the vessel crews. The reduced smaller number of personnel on such large ships, makes it nearly impossible to successfully fight a fire unless the vessel carries an array of fixed fire-fighting equipment. The point here is the fact that, if not quickly brought under control, a fire can be more than the crew’s capability to handle it.

The International Cargo Handling Coordination Association (ICHCA) estimated (using 2016 data) that, every year, 5.4 million containers are packed with dangerous goods. If just one in a thousand of those 5.4 million containers poses a serious risk, then there is a real probability of 5,400 potential tragic incidents each year.

There is a growing position taken by some ship owners, to take the ship to a port that can assist in extinguishing the fires, even flooding the compartments, if conventional extinguishing does not work. This now places the problem squarely on the laps of port management.

Apparently, there are ship fires every week. And crews have effectively handled these. These ‘near misses’ should be dutifully reported so that trends can be observed and noted. The resulting information can help to predict more serious incidents.

Container fires can also have significant environmental impacts, including those from all the waste generated from burnt and wet material. In looking at the findings of GARD (insurance), it is stated that the extreme heat generated during many hold fires force salvers to resort to flooding the cargo spaces with water. The cost of disposing of this waste is very expensive. GARD used a 5,000-TEU ship, which racked up costs of over $10 million. Put that in the context of today’s ocean-going fleet, with vessels greater than 21,000 TEU. Costs could be over one billion dollars.

There are also the non-defined costs of pollution that arise while the fire is being extinguished and water flows back into the ocean.

A vessel can suffer the following after a serious fire:

Over the years there have been many initiatives to reduce and prevent shipboard fires caused by wrong or misleading cargo declaration. Apparently, some shippers are bent on continuing this practice. And as such, more stringent measures are needed.

In 2014, the International Maritime Organization (IMO), the International Labour Organization (ILO) and the United Nations Economic Commission for Europe (UNECE) collaborated to develop The Code of Practice for Packaging of Cargo Transport Units. This instrument is commonly referred to as the CTU Code. And, like the IMDG Code, it is not mandatory.

While the Code has excellent guidelines, there are many existing rules that are in conflict and can cause it to be ineffective. A case in point is: if one shipping line contacts another to report a rogue shipper or shippers, strict anti-trust rules in Europe and the USA make it impossible to share this data. In fact, if these anti-trust rules are broken, fines of up to 10% of the company’s turnover can be levied. This prevents lines from coming together to prevent the increasing incidence of mis-declared containers.

The work continues. And counter measures by lines include the strengthening of inspection procedures and the introduction of penalty charges for shipments found to be improperly packed or declared. Some lines, shipping out of China, now charge $15,000 per box for mis-declared cargo. The sad thing is, it applies if the shipper is caught. If, however the shipper is not caught and fire starts on board ship and it is intense, all evidence is burnt and the shipper can carry on the bad practices.

“There is agreement among experts that the current means of controlling a fire in the cargo hold are of little effect. The safety objectives set out in SOLAS do not seem to be met, and in light of the various recent casualties the time for action is now,” stated the International Union of Marine Insurance recently. “Past experience has shown that hatch fires can only be extinguished if the respective section is flooded with water”.

Shipping lines who invest in sophisticated equipment (to tackle misdeclaration); enhanced firefighting equipment; and, well-drilled crews can tilt the so-called ‘law of averages’ towards their side. However, if one partner in the alliance is not as equipped, that container refused by the “hi-tech” carrier may end up on board as it was not detected by limited technologies operated by a “low-tech” partner.

By late 2020 there will be more than 550 ultra-large container vessels worldwide (i.e. ships over 10,000 teu). Whether by blockchain technology, hi-tech vessels with highly trained crews, more active participation by port management, or a mixture of all, it is clear that the rogue elements will continue with their unsafe practices.

All stakeholders have a role to play. This unfortunately also applies to the smaller vessels trading in the Caribbean region. The fact is, there is a demand for these hazardous substances worldwide so they will be carried. Bans can only be short term and we therefore must be more diligent.

Port managers must protect their fragile assets and as such take all appropriate action to ensure that whatever is loaded out of their facility is verified as safe. []