Those in the know may describe transport of harmful and volatile cargoes as the second most dangerous industry after the nuclear power industry. Save for the size of the bang, this may not be true. It may be that the latter that is second.

The nuclear power generation industry is carefully monitored and checked on a rigid schedule. Those who are employed in or near its facilities know exactly what the dangers are and what specific set of actions are required. And there are numerous concerned citizens’ organizations willing to come out in demonstration to protest any perceived or even suspected negligence. Not so with the transport of dangerous cargo.

Transporting volatile dangerous cargo – lifting it onto or off ships; onto then off of chassis; into then out of warehouses – is by far more hairy than maintaining watch in a nuclear power station. Often, life depends on a single thread. That thread is the diligence of shipping clerks to do their job of documentation without error, all the time. In a single mishap, not to mention the loss of human life, an ocean-going vessel can dump half a million tonnes of dangerous liquid substances into the sea and so create an environmental catastrophe of historic proportions.

The responsibility to handle explosives, gases, flammable liquids, flammable solids, and substances that emit flammable gases when in contact with water is as awesome as it is frightening. 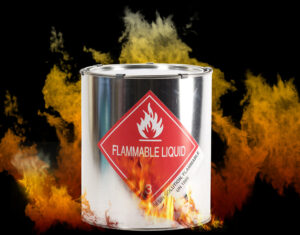 It is said that about 50% of ocean cargo can be classified as hazardous. Some 100,000 chemical substances are defined as dangerous which, if wrongly handled, can cause death of people, environmental disasters or destruction of property. It is impossible to predict the impact of an accident with dangerous substances as chemicals behave differently depending on characteristics, quantity, temperature, atmospheric and weather conditions. This places a high level of responsibility on port authorities to hone and implement effective prevention strategies. This begins with knowledge then meticulous implementation of all relevant international safety regulations and conventions.

Based on the safety considerations set out in parts A and A-1 of chapter VII of the 1974 SOLAS Convention, as amended, many countries have taken steps to regulate the carriage of dangerous goods by sea. However, integration of this in the Caribbean has been low. More recently, as marine pollution becomes an increasingly serious concern, countries have taken further steps to regulate the carriage of marine pollutants, as described in Annex III of MARPOL.

As the worldwide regulatory standard for shipping dangerous goods by vessel/ocean, the International Maritime Dangerous Goods (IMDG) Code is a uniform international code that regulates packing, segregation, stowage and transport of such goods by sea. The IMDG Code is written in conjunction with government regulations under the International Convention for the Safety of Life at Sea (SOLAS) and is a two-volume set available in English.

The 2014 version of IMDG Code incorporates Amendment 37-14, effective January 1, 2015 and made mandatory as of January 1, 2016. The IMDG Code, which was first published in 1965, amplifies the requirements of both Conventions and has become the standard guide to all aspects of handling dangerous goods and marine pollutants in sea transport. The IMDG Code, as originally amended, was recommended to governments as the basis for national regulations by which the requirements of SOLAS 1974 and MARPOL Annex III were effected. The Code as amended by Amendments 35, 36 and 37 is now mandatory.

The IMDG Code lays down basic principles and detailed recommendations for individual substances, materials and articles. It presented recommendations for good operational practice, including advice on terminology, packing, labelling, stowage, segregation and handling, as well as emergency response action. Although the information in the Code is directed primarily at the mariner, its provisions may affect a range of industries and services. Those likely to be affected are manufacturers, packers, shippers, feeder services providers including road and rail.

In May 2014, IMO’s Maritime Safety Committee adopted the amendments to the IMDG Code contained in Resolution MSC.372 (93) Amendments to the International Maritime Dangerous Goods (IMDG) Code. Contracting governments had been able to apply the new requirements, in part or in whole, on a voluntary basis since January 1, 2015. Compliance with these amendments became mandatory on January 1, 2016. However, some existing provisions concerning labeling and warning marks were allowed to be applied until 31 December 2016.

If a shipper consigns goods that are classified as potentially dangerous when transported, the shipper must arrange packing and transportation by air, sea, road, rail or inland waterway according to international regulations. The UN Model Regulations harmonize the rules on the various methods of transportation into a classification system in which each dangerous substance or article is assigned to a class defining the type of danger which that substance presents. The packing group (PG) then further classifies the level of danger according to PG I, PG II or PG III.

Together, class and packing group dictate how shippers must package, label and carry dangerous goods, including inner and outer packaging; the suitability of packaging materials; and, the marks and labels they must display. Other regulations define the training and the qualifications that dangerous goods drivers and safety advisors must achieve.

When dangerous goods are transported, the consignment must be accompanied by a transport document, declaring the description and nature of the goods. Documentation must be in accordance with the specifications set by the dangerous goods regulations applicable to the chosen mode of transport. The transport document must be completed by the consignor (i. e the person or firm from whom the goods have been received for transport).

In addition to the requirements specific to their transportation, suppliers of dangerous goods are required by law to label their hazardous products and packaged chemicals with hazard symbols, warnings and safety advice. A range of internationally recognised symbols has been developed so that people handling the goods know the nature of the hazard they face.

The USA has different requirements from most European countries. So, although dangerous goods from America can be moved with their labeling, it is likely that the shipper will have to re-label them before sending them into the European Union. Companies that trade in goods classified as dangerous must therefore be careful to comply with packaging requirements contained in the relevant legislation in order to ship goods safely.

Packaging (other than for limited and excepted quantities) has to be designed and constructed to UN specifications and must pass practical transport related tests such as being dropped, held in a stack and subjected to pressure demands. Packaging must also meet the needs of the substance it is to contain and be certified by a national competent authority.

UN approved packaging is marked with the prefix ‘UN’ and followed by codes that are listed in the relevant regulations relating to the national and international carriage of dangerous goods by road, rail, air and sea. Within the UK for example, the Vehicle Certification Agency (VCA) Dangerous Goods Office has responsibility for the certification of dangerous goods packaging. Packaging must also bear the correct label(s) and markings appropriate for the substance and package.

Training is required for the handling of dangerous goods. Amongst these are:

The Caribbean is highly dependent on the sea for economic, social and recreational sustenance. The fact that Caribbean ports are, generally, located less than one metre above sea level makes the region vulnerable to Sea Level Rise. The region still lacks legislation and policy in managing IMDG goods in ports and inland. This creates a risk exposure to international fines for improper documentation procedures. Furthermore, many port workers suffer injury and death due to lack of knowledge about how to handle and stow dangerous cargo. Training is often regarded as an optional expense in the Caribbean and the low skill levels of port workers makes the region more prone to accidents attributed to IMDG-designated cargo.

Is your port equipped with an IMDG procedure manual and emergency response protocol? The answer to that question may tell you a lot. []