2017, March 1: Twenty participants from eight organizations attended the three-day Crisis Management Course last October in Paramaribo. The event which started on October 24th was the first such course hosted by the Suriname Port Management Company in collaboration with the Port Management Association of the Caribbean (PMAC) and was described as a huge success.

“The participants strongly endorsed the course and noted its relevance in a world of fast-paced developments and continuously improving standards of good practise regarding management of crises and disasters. Most subjects were important eye-openers for the participants, showing the complexity of crisis management, and the significant amount of unexpected relationships established during a crisis. This prompted the suggestion that there should have been government representation at the course. Some participants solicited the consultant, Bernard Groot to use his lectures and drills to prepare companies, ports and other organizations for crisis and disaster management,” said the PMAC’s Executive Assistant, Linda Profijt del Prado.

The course ended with an examination in which the participants sat in the “hot seat” solving a simulated crisis in the harbour. She quoted one of the participant’s description of the experience : ‘The final exercise was tough, I almost could feel the pressure building up’. According to Mrs. Profijt del Prado, everybody was well prepared and passed the examination with good results. 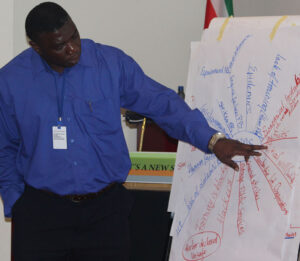 While highlighting the importance of education and the need to maximize human resources in an increasingly competitive global environment, the PMAC Executive Assistant drew reference to the PMAC’s mission ‘to improve the proficiency of member ports and the quality of services offered to their users, specifically through the facilitation of relevant training designed to develop worker’s competencies, and meet the ever-increasing challenges of the global environment.’  She said that the subject, Crisis Management, while relatively new, was becoming increasingly important. This course was a perfect example of what the PMAC could do to achieve its mission, she said.

On the final day of the event, the Chief Executive Officer (CEO) of the Suriname Ports Management Company, Drs. Andreas Talea, emphasised the importance of crisis management and the need for preparation, “for if you fail to prepare, you prepare to fail”, he said. He urged the participants to convince their CEO’s about the need for crisis and disaster preparation. []