2018, November 1: On the ridge of a hill overlooking the Castries harbour lies hallowed ground. Perhaps the most strategic piece of real estate on Saint Lucia, this hill has figured prominently in the history and development of this country. Indeed, most of the violent 18th Century conflicts between France and England for control of Saint Lucia (wars that saw the colony becoming French, then English; then French, then English) were fought for and on Morne Fortuné.

“Whoever controlled Morne Fortuné effectively controlled Saint Lucia,” was the answer my friend gave to my unasked question as we later looked down and out over the entrance and spread of the Castries harbour. Invading forces would first clearly have to take Morne Fortuné, and hold it in order to prevail.

This of course explained why some of the oldest marked graves and some of the oldest brick and mortar structures on Saint Lucia are to be found there on Good Luck Hill. And the commanding view of what is today the country’s main cargo and cruise terminal was ample evidence of the strategic advantage that Morne Fortuné offered the French and British military forces that alternatively occupied Saint Lucia.

Overlooking La Toc point and the southern arm of Castries harbour, Morne Fortuné today has a residential district at its lower contours. The climb gets steeper as the road twists and turns towards the crest of the ridge over which so much blood was shed but which brought fame and honour to a tough set of Irishmen, banded together as the 27th Inniskilling Regiment. They took Morne Fortuné from the French, twice.

Many colonial heroes, famous and unsung, were interred at Morne Fortuné. But so also were two Saint Lucian heroes of the 20th Century – Sir W. Arthur Lewis (1915 – 1991) and Sir Derek Walcott (1930 – 2017) – who, by intellect and dint of persistent work, each with his own method, earned a measure of global acknowledgement for the emerging peoples of the new Caribbean. Both Nobel laureates: Sir Derek for Literature in 1992 and Sir Arthur, 40 years ago in 1979, for Economics – both now illustrious neighbours on old Good Luck Hill.

The car lurched then accelerated to clear the last hill challenge and suddenly we were in a space named after one of these two Saint Lucian heroes. The sign said Sir Arthur Lewis Community College and we turned onto clean, well-kept grounds.

I grew up in a world where the name, Sir Arthur Lewis, conjured up an intellectual giant, one bigger than all the other giants … like the biggest of the big. And so he was. William Arthur Lewis was a pioneer, a leader, a visionary, an authority. The first black man to enrol at the London School of Economics (obtaining the highest grades in its history) and the first to teach at the London School of Economics (LSE), he still was, up to this moment of thought, the only black man to win a Nobel prize in the sciences. Sir Arthur, a humble man, was to establish a huge reputation, globally acknowledged for pioneering Development Economics and, for an extended period, was accepted as the authority on matters of International Terms of Trade.

“I had no idea in 1933 what economics was, but I did well in the subject from the start, and when I graduated in 1937 with first class honours, LSE gave me a scholarship to do a Ph.D. in Industrial Economics,” he wrote subsequently in an autobiography.

Sir Arthur went on to become, inter alia, the first Vice Chancellor of the University of the West Indies, Co-founder of the United Nations Development Programme (UNDP), Chancellor of the University of Guyana and the Founding President of the Caribbean Development Bank. Concepts and strategies that Sir. Arthur Lewis fathered were discussed, debated, referenced but never ignored. His name was associated with to the major economic development planning initiatives of his time and reverberated off the walls at global multi-lateral conferences and in national development initiatives.

My first thought, as we entered the grounds of the Sir Arthur Lewis Community College (SALCC), named in his honour, was: this great Saint Lucian was like no ordinary man. My immediate expectations went up a notch for his name.

It was mid-summer and so there were no gathering of students anywhere. The campus was as quiet as it was impressive. Built to shelter and accommodate military communities the grounds were designed accordingly — spacious and well-planned.

Not many community colleges in the Caribbean that I know and particularly so close to a major urban centre, had this much space, was my second thought. Many I know to be stark — just buildings with little or very little green space. The grounds of the SALCC showed more like a well-endowed university campus. 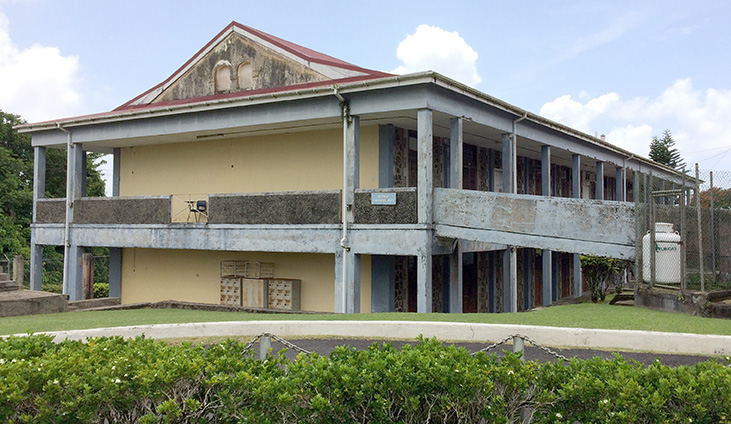 As we approached the first buildings, meandering through paved roadways, it became painfully obvious … just from looking at the outside of the structures, that there was immediate need for substantial repair and refurbishing.

The black asphalt ultimately comes to a gate (locked on the day), beyond which the old military structures, the Inniskilling Monument and the Walcott tomb are kept safe by The Saint Lucia National Trust. I get out to take a few photos of the historical buildings but am seized with the details of the scene. The grounds are in ship-shape, a clear sign of people doing the very best with what they have. But the physical condition of the outside of the buildings suggests that those people have very little capital. It’s not a paint job that is needed … although that should also be on the list. Some physical refurbishment appears urgently needed. The place is clean and tidy but appears to be (not so slowly) falling apart. 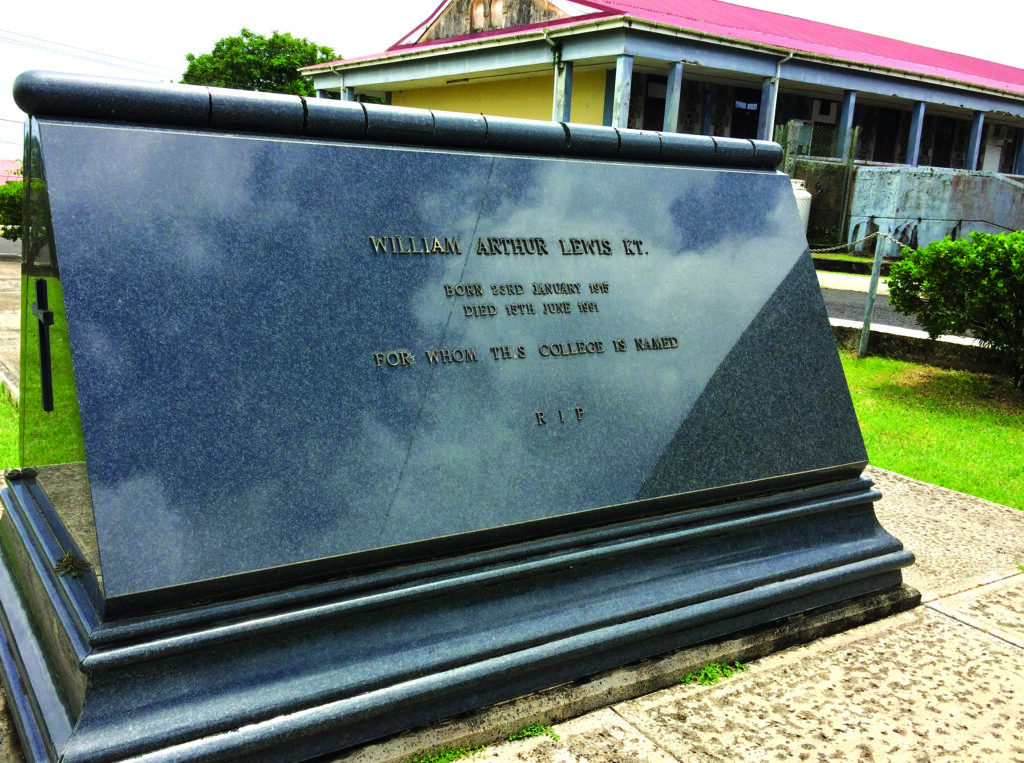 The Sir Arthur Lewis Community College (SALCC) is Saint Lucia’s top tertiary education institution. It has on roll about 2,500 students, pursuing qualifications in Agriculture, Arts and Sciences, Building, Business, Education and Educational Administration, Electrical systems, Health Sciences, Hospitality and Mechanical systems. In many respects, this institution is vital to the development of the country. And many of its graduates over the years now work in the maritime sector in both the cargo and cruise sub-sectors.

With photos of Sir Arthur’s mausoleum safely in my phone, I returned to the car, pensive and even a little worried as we drove towards the exit to continue our day trip. The buildings of the UWI Saint Lucia property that we passed on the way out looked dirty, abandoned and were cause for further gloom. Ironically, the two institutions in his homeland that should themselves be monuments to Sir Arthur’s tremendous contribution to global development, one of which bears his name, the other which he ‘led’, appear to be in need of development.

I left thinking that this was not a Saint Lucian issue but rather a Caribbean problem. Structures and resources to facilitate education cannot be allowed to fall into disrepair. Regular and sustained maintenance is far more economical.

The pioneering work of Sir Arthur Lewis and the solutions for economic development, based on study, that were effectively addressed through his writings and lectures should, somehow, be manifested in the work and accomplishments of the institutions which he founded or that he inspired through his leadership. That they are metaphorical foundries where tools for development are forged only makes it imperative.

The Caribbean Development Bank (CDB) and the peoples of the Caribbean owe Sir Arthur a lot, said Professor Compton Bourne, O.E., President for 10 years of that regional institution (2001 – 2011).

“He made a major contribution to the formulation of development policy in the Caribbean … through timely interventions and articles in the newspapers that would start a public debate along the right lines,” he said in a recorded interview. Professor Bourne said that this was important not just for the CDB, a development institution but, for the wider Caribbean “… to have at its disposal, “… a set of well worked out ideas as to how to proceed.”

In this regard, Sir Arthur’s influences and ideas bolstered and informed the leadership of newly emerging nations, way beyond the Caribbean and particularly in Africa where the bonds of colonialism were being loosened.

The institutions that bear his name, those that he founded and those that he led, should be concerned that the footprints on the sands of time, left behind by our own great men, could vanish forever, covered over by the winds of time.

Perhaps such concern will initiate change that will reverse the physical decline that is now obvious even to a passing visitor; change that will set the stage for accomplishing that for which Sir. W. Arthur Lewis strived. But one of these organizations – the UWI, the UNDP, the CDB or the SALCC ­ has to take the lead.

Development is about facilitating the realisation of human potential.  Education and skills training are fundamentals for development. Safe and secure structures in which to house schools and colleges are prerequisites. The maritime sector, on which regional economic development relies,  needs graduates from home-based institutions such as the Sir Arthur Lewis Community College.

Repairs become only more costly with each passing day.

A stitch, in time, saves nine.