By Fritz Pinnock and Ibrahim Ajagunna

2018, November 1: Cruise tourism continues to be a supply-led industry in that demands increases as more cruise ships are built. On the other hand, the rest of the transportation industry, including the ferry services, remains a derived demand and demonstrates the fluctuations of the market.

Since the birth of modern cruise tourism in the late 1960s, the industry has been increasing each year and has not been affected in any significant way by market forces, as the industry remained agile and shifts its assets to weather the storms.

The crisis of 911 in US presented a shift where the cruise lines opened up new North American homeports along the southern coast of the country, so as to eliminate the need for passengers to fly to join vessels. Numbers increased while other segments of the tourism industry virtually collapsed.

Interestingly, in mid-2000, the Caribbean accounted for approximately 50% of market share. This has declined to just over 35% while new regions such as China, Pacific, New Zealand and Australia are showing significant signs of growth. The smaller ships have been moved out moved out in the search for ‘untapped’ and ‘exotic’ areas of the world. And they are being replaced by megaships with the capacity to carry more passengers with fewer vessel calls. Alongside this reality is the phenomenon in which cruise lines, owning private islands (with the Bahamas accounting for the largest number), control much of the destination earnings.

The Caribbean region has been investing heavily in cruise port facilities. The hope is to attract larger vessels. But the economic impact has been less than some may have anticipated. The reasons may address issues related to realities, such as:

There is an inverse relationship between the size of the cruise ship and net earnings to the Caribbean economies in that, as the ships get larger, the higher the ‘leakage’ back to the vessels as the ships themselves become a destination1.  The Oasis Class ships are now full-fledged floating resorts that boast Central Park, zip lines, large shopping malls and endless onboard entertainment. In a recent interview, several passengers on RCCL vessels said they did not come off the vessels, as everything ashore was better onboard and not as hot and humid in August. 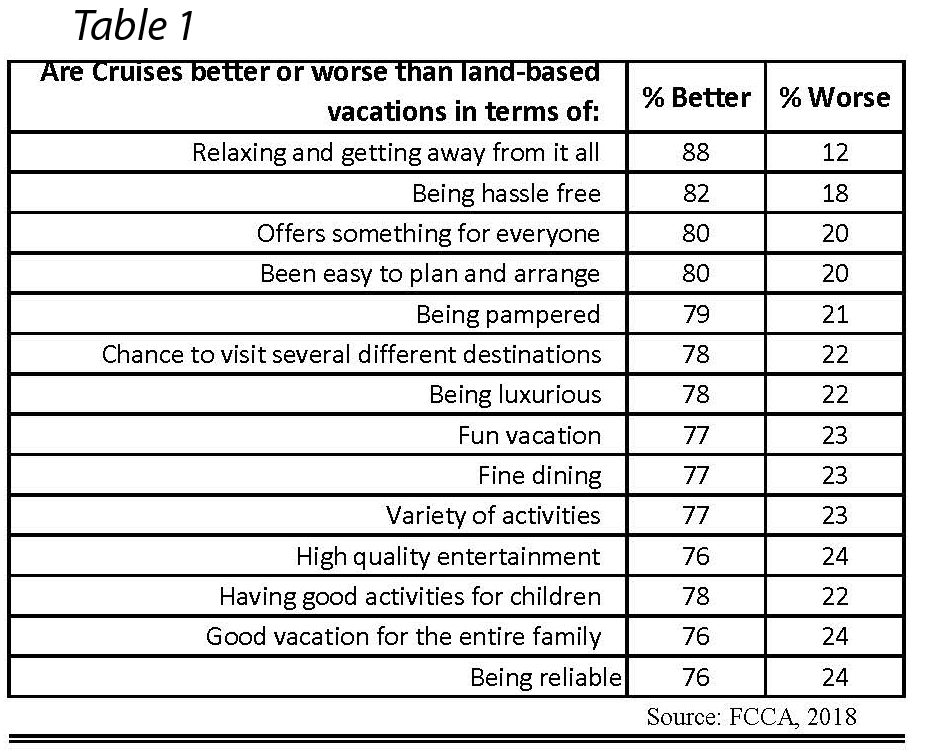 The statistics in the attached tables show the position of the industry in recent time.

Whereas the numbers for the USA are increasing, the rise of new destinations such as China, the Pacific and South America are also rising (but at a faster rate), thereby decreasing the overall US market share. Similarly, while the deployment for the Caribbean cruise passengers numbers have been increasing, fewer ships carrying passengers to new destinations growing at a faster rate and the Caribbean overall market is ‘tending south’, as indicated in the tables below.

Cruise Critic predicted that 2018 promised to be one of the biggest years in cruising. The prediction focuses on trends that will further shape the industry going forward. These include: technology that augments the cruise experience, cruises focusing on specific countries, bigger ships getting better, destination port renovations to improve cruise terminals and expedite embarkation and innovation as cruise lines look to rivers and land for inspiration. In addition, yachting continues to gain traction while river cruising gets more active and cruise lines continue to invest more and more in private islands.

It is obvious that the cruise product is changing to an experiential product. Passengers are demanding service from authentic Caribbean nationals who make up less than 7% of overall crew deployment despite the region’s one-third global market share.

When compared to the low salaries and seasonality affecting the land-based hotel industry, cruise tourism jobs are now more attractive to nationals from Jamaica, Saint Lucia and from St. Vincent and the Grenadines, to name a few.

The authors are predicting that this will become a new wave of cruising where, between the days at sea and time on private islands, the cruise line will be able to keep 100% of the feast (earnings) while countries that depend on the cruise ship industry compete for the crumbs. []