2019, March 1: Having recently completed a massive expansion programme that effectively doubled container capacity at the end of 2015 Manzanillo is confident with its overall capability to handle the demands of future growth.

With that expansion, at a cost of 270 million USD, MIT increased capacity from 2.0 million teu to 4.0 million teu and built a 400-metre quay for neopanamax vessels. They dredged around the post-panamax berths to 16.5 metres; installed four super-postpamanax cranes; and then automated the container yard, adding six automatic stacking cranes (ASCs) in the process.

“Basically, MIT has plenty of infrastructure to cater for future growth. Now, it’s mostly about people and process … including technology,” the company told Portside Caribbean at the end of 2018.

MIT has a long tradition of developing and empowering staff and provide safe and fair employment practices. And, as automation creeps into every nook and cranny of industrial life, the company has become increasingly protective of its people, “… not just our staff but the communities around (the terminal) where our staff and their families live,” MIT Vice President Juan Carlos Croston said a year ago when MIT hosted the inaugural Caribbean Port Management Workshop (in January 2018).

Since that discussion, MIT has moved to engage some of its employees as goodwill ambassadors for the company. With the launch of its Ambassadors Programme, MIT engaged with staff to share and promote corporate values and, in so doing, improve customer service. 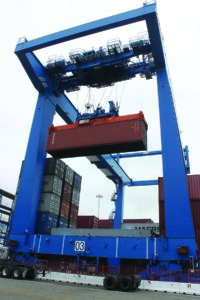 Meanwhile, the company’s programmes for improvement and advancement continue with a recently completed project to make the terminal’s electrical power supply even more reliable. And trucks have been retrofitted in the process of automation of the yard.

During the current year, MIT will lay 1.8 hectares of concrete pavement, which should have a significant effect in improving speed and yard efficiency. Plans for the year also include installation of more than 400 electrical outlets for reefer containers.

MIT is located on the Atlantic Coast of Panama, near to the Northern entrance of the Panama Canal. It is a privately managed, deep water port, originally built as a specialized container terminal. Transshipment cargo accounts for approximately 85% of its throughput. In this regard, MIT provides connectivity to some 125 countries. []