2016 February 1: Manzanillo International Terminal (MIT) celebrated 20 years of operations in April 2015, but the year just completed was significant for other reasons as well.

In the second half of 2015, two new berths were brought into service and four new super port-panamax cranes were delivered. The new cranes arrived in Panama in August. The first of two new Mediterranean-style roll on-roll off (ro-ro) berths, Berth 7, was brought into service in September and the second, container Berth 8 was opened in October. MIT now offers 2,000 metres of container berths and two dedicated Med-style ro-ro berths.

With the significant upgrade in capability, MIT’s record and reputation for high-quality customer service are secure. Last year, the company implemented further improvements to its already high levels of service in the delivery of imports. Local imports are now being delivered with automatic stacking cranes (ASCs) that use radio-frequency identification (RFID) technology. The ASCs deliver containers directly onto the truckers’ chassis. This element of MIT’s service has delivered significant efficiencies, reducing times for imports delivery and increasing space availability at the terminal. MIT customers now also enjoy added resources available through its improved website. 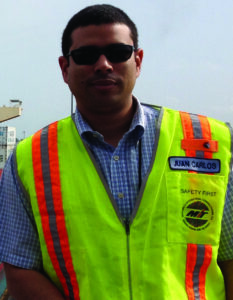 “Shipping lines can request late gates directly online; while consignees and shippers can check the  costs of operations in the terminal using our online quotations,” said Juan Carlos Croston, MIT’s Vice-President of Marketing.

In a year where many entities had declines, MIT had a marginal increase in vessel calls. Last year the terminal recorded 2,690 vessel calls, up from 2,653 in 2014. However, container cargo throughput decreased from 2.07 million teu in 2014 to 1.98 million teu in 2015. Volume decrease was attributed to weaker national economies in the region and the economic slump in China.

The year ahead is not likely to show significant upturns in the region as global economic trends continue into 2016. MIT’s projections for 2016 suggest that container volumes at the terminal will be similar to 2015, unless of course there is a dramatic upturn in regional economies. Estimates show that MIT will experience the effects of the Panama Canal expansion, with increased container volumes, by 2017.

The President of the Republic of Panama, Juan Carlos Varela (at the microphone), gives the keynote address at the opening ceremony of two new berths at MIT. Standing immediately behind the President are (l – r) Jorge Barakat, Administrator, Panama Maritime Authority; Federico Policani, Mayor of the city of Colon; Juan Carlos Croston, Vice President Marketing, MIT; Stacy Hatfield, General Manager, MIT; and Carlos Duboi, Secretario de la Secretaria de Metas (of the President’s office) . In the background are employees of MIT. Those wearing orange shirts have more than two years work experience at MIT and the ones in green have less than two years. The colour idea, rooted in industrial safety, is to protect employees by clearly identifying people who might be more at risk during operations, due to lack of experience. – Photo courtesy of MIT 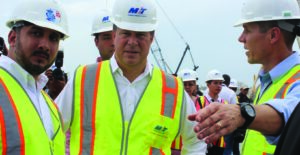 MIT General Manager Stacy Hatfield (r) makes a point to the President of the Republic of Panama, Juan Carlos Varela, (centre) as MIT executives take him on a tour following the opening of the new berthing facilities. At left is Jorge Barakat, Administrator of the Panama Maritime Authority. – Photo courtesy of MIT