2015 October 1: Caribbean ports face a real challenge of keeping aging cargo handling equipment working and productive. The challenge is not made easier by the vast array of brands on marine terminals across the Caribbean. However, port managers across the region have been able to keep their fleets functioning, despite the many challenges. There have even been reports of increased productivity. And, in some ports, managers were eagerly look forward to acquiring new equipment in the months ahead.

Information about performance of specific brands and models, their effectiveness, reliability and expected lifespan, is useful for guiding decision-making for equipment purchasing. However, many ports did not respond to the questionnaire in the informal survey carried out for this exercise. A few did not want to divulge the brand of equipment that did not live up to expectations. Others however saw the benefits to be derived from sharing information about the performance of specific equipment in which millions of dollars have been invested. The information presented here will hopefully begin the process of information exchange, which will ultimately empower all port operators, in the Caribbean and everywhere and help, over time, to inform the decision-making process.

There are about 18 different equipment brands operating on ports across the Caribbean. On the six ports reviewed here, there were four different brands of ship-shore gantry cranes; four of mobile cranes; five of RTGs; three of reach stackers; and, three of empty container handlers. 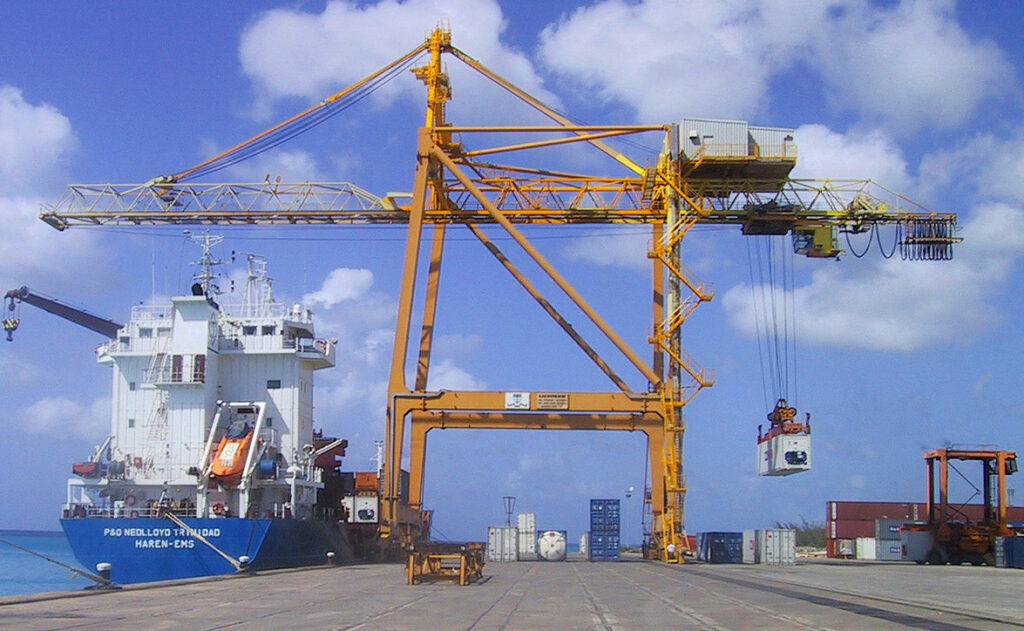 The port of Bridgetown, known for its high-performance standards, is expecting to take possession of a Panamax crane and five electric straddle carriers by the end of this year, part of a US$25,000,000 equipment upgrade being undertaken by Barbados Port Inc. The new equipment will augment the Bridgetown terminal’s aging but dependable and well-maintained fleet of container and cargo handling equipment.

Manager of Terminal Operations, Ian Stewart, in discussing the port’s equipment capability stated: “The work horses are without doubt our Liebherr gantry crane and our straddle carriers. Both crane and strads are now quite old but have done notable duty over the years. Our gantry is still doing over 25 moves per hour although of 1987 vintage and we are really dependent on her for our daily container vessel operations.”

With a meticulously supervised maintenance programme, the port of Bridgetown has been recognized across the region as a dependable marine facility and has won the respect of the regional shipping industry, having topped the PMAC and CSA Port of the Year awards on several occasions.

Asked about the most reliable equipment on the terminal, Mr. Stewart stated: “We must hold up our gantry as being the most reliable on the port. The crane  has a 30.5-metre outreach on the water side and a 13.10 metre outreach on landside. The spreader height above rail is 25.91 metres. Despite her age and size, she never fails to provide us with reliable service every day and although we are to receive a new one in another few months, our old girl will still remain with us after refurbishment for many more years to come.” 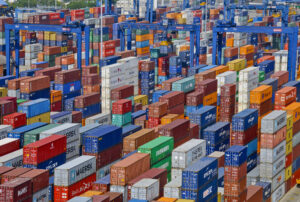 The workhorses at the SPRC-Contecar terminal in Cartagena, Colombia are the  Kalmar rubber tyred gantry (RTGs) cranes. They support both gate and berth activities. The staff at the award-winning terminal also has a lot of respect for their Super

“Both Noell and ZPMC have turned out to be pretty reliable brands. Our Super  Post Panamax cranes (both brands) realized an average of 15,550 moves (or 500 hours of work) before going into minor maintenance procedures,” stated Giovanni Benedetti, SPRC-Contecar’s Director of Sales and Marketing.

SPRC-Contecar, with a total area of 127 hectares, handles containers, vehicles, break bulk cargo, perishables and hazardous cargo, as well as cruise ships. The port currently has two Post Panamax and 15 Super Post Panamax ship-to-shore cranes and five mobile cranes (100 ton. capacity). Plans are for 20 Super Post Panamax gantry cranes. It currently has 43 RTGs but plans are for 74. The size of its current fleet of 14 reach stackers will not be expanded although old units will be replaced over time. The fleet of 154 terminal trucks is to be expanded to 169.

“Even though we´ve used Noell SPP cranes in the past, we´ve switched now to ZPMC.  For RTGS, we´ve used Sisu in the past but are currently using Kalmar,” Mr. Benedetti stated.

The tiny port in Nevis also reports aging equipment. The port serves a tiny island of just over 93Km2 (36 square) with a population of just over 12,000 persons but with a tourist industry that brings in over 40,000 visitors each year. Clearly Nevis does not handle container traffic or the cargo volume of other ports which responded to our  queries. Its 5-ton forklift (TCM FD50T8) is the ‘work horse’ and its stablemate is a 3-ton Toyota forklift. A fifth wheel Ottowa truck completes the equipment list. Word from Nevis: “All the equipment are aged and have served us well despite, occasional expected challenges.” 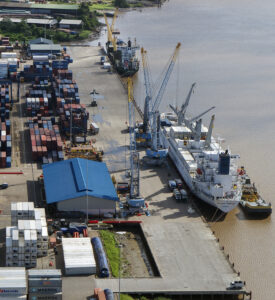 Suriname’s port of Nieuwe Haven has reported a significant improvement in productivity since deployment of its three 315 tons Gottwald mobile cranes with lifting capacity of 100 tons. Managing Director of N.V. Havenbeheer, Andreas Talea said that before the introduction of the mobile cranes, the vessel turnaround time for 400 moves was 24 – 36 hours. Efficiency has since increased to 10 – 12 hours for the same number of moves, he stated.

A fourth crane, a Liebherr mobile LHM280 with an 85 ton lifting capacity, is to be acquired by the end of 2015.

Nieuwe Haven has two terminal operators with the Suriname Ports Management company as landlord. They presently load and discharge either with ship gear only; with mobile cranes or a combination of both.

The port prides itself on its reliability and high productivity levels, zero fatalities and a green environment. Terminal operators are certified ISO 9002 and ISO 14002 and work within a strict maintenance schedule. 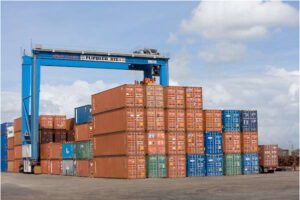 The Port of Point Lisas, Trinidad, plans to add six terminal tractor trucks and eight trailers to its existing fleet of cargo handling equipment by the end of 2015. By the middle of next year, the terminal, owned and operated by Point Lisas Industrial Port Development Corporation (PLIPDECO), is expecting to acquire another reach stacker and an empty container handler.

The Gottwald mobile harbour crane (GHMK 6507) with a minimum lifting capacity of 120 metric tonnes and a Bromma telescopic spreader with a minimum lifting capacity of 40 tonnes, is the newest piece of equipment. It was brought into service in January 2014. Just a year earlier, in January 2013, a Terex reach stacker (Model CS45KM) was put into service. Indeed, the oldest major equipment operating on the port, is the Gottwald 280 mobile crane, with maximum capacity 100 tonnes, which was acquired in 1998.

PLIPDECO identifies its two Liebherr ship-to-shore gantry cranes as the most efficient and reliable equipment due to their consistent levels of performance.

The port of Port of Spain has four ship-to-shore gantries on its front line, a pair of Paceco 1550s, and two Liebherr (P130 Super and P164L Super). The two Liebherr cranes and one Paceco (designated STS002) are the mainstay of Trinidad’s main marine terminal. The Liebherr cranes get the nod for being the most reliable.

The port also has in service a Gottwald HMK300 mobile harbour crane with a capacity of 100 tonnes. It is this crane that does most of the port’s heavy lifting and it is highly regarded by the operators.

A fleet of 14 rubber tyred gantries moves containers around the facility, nine of which carry the Kalmar logo; two are SISU; two Ferranti (FD40s) and a Diamond, which is the oldest of the fleet. Five of the Kalmar RTGs are E-One models, which are reportedly faster than the four older 2040C.

The port is also equipped with three Fantuzzi reach stackers (including two CS45KS models and a RS 50) and one SISU (RSD 4518TL).

The fleet of nine empty container handlers is dominated by the Kalmar brand with three Boss (5B1) units and one Hyster (H-450-EC) completing the list. The port also has four mobile cranes, three Linkbelt models, two UC-78s and a HC138; and, a Demag MC600. ­