2016, February 1: The most significant development in port St. Maarten in 2015 was the acquisition and commissioning of a new port crane – the largest mobile crane in the northeastern Caribbean. The Terex Gottwald Model 6 mobile harbour crane arrived at the Dr. A.C. Wathey cruise and cargo facility at the end of August, and the commissioning process was completed on October 15th.

The purchase was financed by RBC (Royal Bank of Canada). The 14-year-old HMK 260E Gottwald (referred to as Crane 1), which the Model 6 replaced, was sold to a group in Mexico by broker Pacific Handling Systems Inc.

The new crane and the additional Bromma spreaders will bolster Port St. Maarten’s 24/7 operations, allowing continued expansion of cargo-related activities. With a reach of 51 metres and load capacity of 125 tons, the new crane will provide the capability needed to achieve growth targets. The cargo section at Port St. Maarten provides a large part of its revenues and the port’s CEO, Mark Mingo, indicated that the emphasis for 2016 will be on efficiency in port operations. 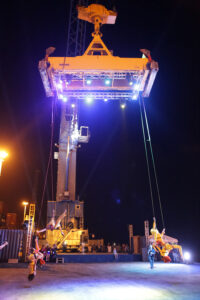 “More focus will be placed on operational excellence and finding the right balance between operational costs and revenues,” Mr. Mingo stated. “In 2016 Port St. Maarten will be placing more focus on the transshipment segment and closing strategic agreements with the cargo principals. More investments will be made to enhance the transshipment segment and improve vessel turnaround time.”

If efficiency and cost savings are the priorities, then the new crane will certainly facilitate the process. The Terex Gottwald Model 6 is a high-performance unit. It can work ships up to post-Panamax and Capesize Bulker class and is equipped with the technical and ergonomic features required to improve productivity. Port St. Maarten crane staff is already trained in using the new crane.

In recent years, Port St. Maarten has made significant investments in the cargo side of its business. Infrastructure development, dredging, equipment upgrading and staff training have been its focus. It now has six nationals certified as operators and supervisors. These investments have produced steady growth in container business making the port a regional sub-hub for the north-eastern Caribbean.

The port had an increase in cargo vessel calls of 7%, (from 1,120 in 2014 to 1,198 in 2015); while container throughput increased by over 15%, (from 82,648 teu in 2014 to 95,190 teu). Port St. Maarten serves Anguilla, Montserrat, St. Kitts and Nevis, and Antigua and Barbuda. The port is also in the process of developing what has been described as “a special relationship” with Saba and St. Eustatius to include port handling, operations, economic development and sustainability. Both those Dutch islands presently receive cargo shipments and port services from St. Maarten.

At the start of 2016, the port of St. Maarten was already reporting higher levels of productivity. []