2017, March 1: Suriname’s Nieuwe Haven Terminal was renamed the Dr. Jules Sedney – Port of Paramaribo. The name change, in honour of a former Prime Minister of Suriname, was effected by an ‘act and order of the President of the Republic of Suriname’. The announcement was made public on November 11, 2016, at a ceremony in Paramaribo to mark the 45th anniversary of the Suriname Port Management Company (SPMC).

Dr. Jules Sedney, Suriname’s Prime Minister from 1969 to 1973 and now 93 years old was present at the event. He was responsible for signing the agreement to build the Port. Also present to witness the event were a number of dignitaries and officials including representatives of government, stakeholders and senior management of the port.

One highlight of the event was the speech of the Minister of Transport, Communication and Tourism, His Excellency Andoyo Rusland, who officially represented the President of the Republic of Suriname, His Excellency Desire Delano Bouterse, who could not attend. Representatives of the labour union as well as the port’s Board of Directors also spoke at the historic event.

Collectively they addressed not only the significant role of the port in the country’s development but also the importance of a trained and competent workforce. Comments were made about the port’s performance in the provision of excellent services; the relationship and results of public-private partnership; good governance; and, corporate social responsibility.

The act of signing the agreement for building of the Nieuwe Haven Terminal is a landmark in Suriname’s history, the Minister of Transport declared.

An emotional Dr. Jules Sedney thanked the Government of Suriname for the honour bestowed upon him. 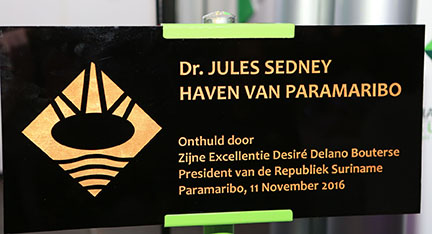 A commemorative book “45 year N.V.Havenbeheer Suriname” will be published to mark the occasion. []