Mixed expectations for cargo shipping in 2017

2017, March 1: The year just ended was one that many who move cargo would like to quickly forget.

Hanjin Shipping going into receivership after banks withdrew backing then subsequently filing for bankruptcy on August 31 was a shocker. At one time the world’s seventh largest line (by capacity) and fourth in the US market was on its back, weighed down by debt. Its mid-year report indicated total debts of USD5.5 million and the banks did not think its financing plans were sufficient.

Its Asia offices stopped taking bookings. Its ships were being arrested in terminals where they were docked at the time the crisis hit the news. Ports turned down berthing requests in fear they would not have been able to collect fees. South Korea’s largest shipping line had all of its assets frozen; cargo-loaded ships idled for weeks; containers left sitting on docks all over the world; and, creditors seizing its assets for outstanding debts. It was a mess that could not be cleaned up by $54 million approved by the Hanjin Group (to recover billions of dollars of stranded cargo in half-million containers in ports and elsewhere).

Then came rumours about another major global carrier, Hamburg Süd, now the seventh largest global line by capacity. The German giant was said to be up for sale. By the end of November, the Wall Street Journal reported the rumours. And within a week, A.P. Moller-Maersk announced that Maersk Line, already the world’s biggest shipping company, would be acquiring Hamburg Süd.

Maersk has more than 600 ships. Hamburg Süd operates about 130 vessels in its largely north-south traffic. The acquisition reduced the average age of Maersk’s fleet, now 741 container ships, from 9.2 years to 8.7 years. The acquisition was also expected to increase Maersk’s influence and presence in Latin America, where Hamburg Süd has had a high profile for almost 150 years.

“This will provide us with a very strong platform in Latin America,” said Søren Skou, CEO of Maersk Line since 2012; and, recently (June 2016) appointed Maersk Group CEO. He had CEO of the Transport and Logistics division added to his portfolio in October 2016. 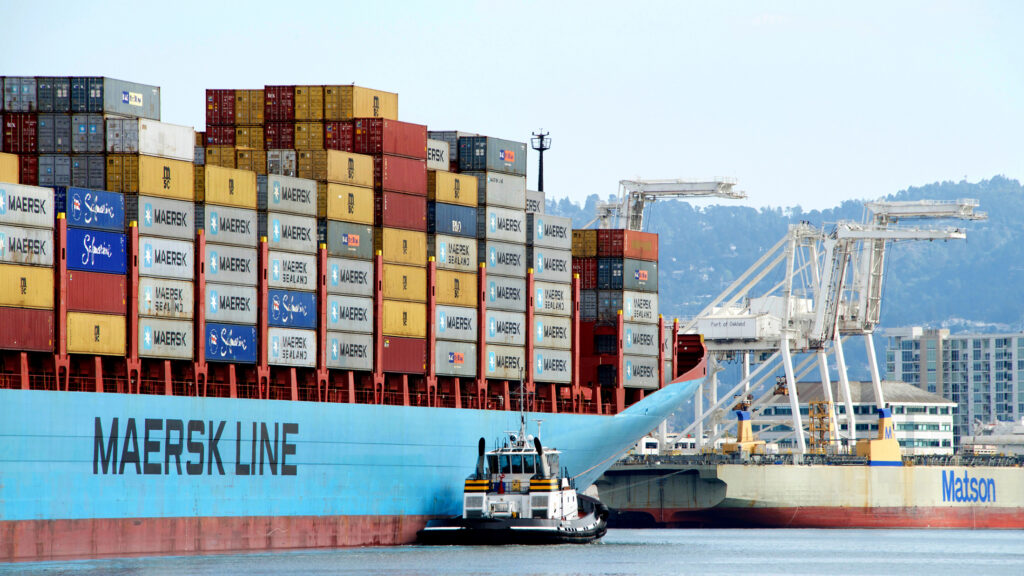 Maersk shares immediately shot up 5% as its new acquisition boosted its market-share by more than three percentage points to 18.6%. This is Maersk’s first acquisition since it took over P&O Nedlloyd in the summer of 2005.

Even before the rumours about Hanjin started circulating, CMA CGM had inked a deal in which it took control of Neptune Orient Lines (NOL). On June 10, the French group took control of the Singapore-based NOL, known for its APL brand, making it a subsidiary. CMA CGM then boasted in advertisements under the banner ‘Together Stronger’ that NOL, the number 12 in world container shipping, would make it stronger and give it: 11.7% of market share; a fleet of 536 vessels; and, capacity of 2.4 million teu. The acquisition was expected to give CMA CGM market leadership in the trans-Pacific trade.

And, in the last week of November, the European Commission gave conditional approval to a merger between Hapag-Lloyd and United Arab Shipping Company (UASC). The Business Combination Agreement merging the two companies was announced by UASC on July 18. The merger will rank Hapag-Lloyd among the five largest container lines in the world, with 237 ships and a fleet capacity of about 1.6 million teu.

Industry experts are not gung-ho about 2017. No one believes the world changed on December 31 at midnight. They are saying: “… more turmoil and volatility…”, “… outlook is still bleak …”; “… things will get worse before they get better.” Hardly encouraging prognostications. However, if M&A (mergers and acquisitions) was the theme for 2016, ‘consolidation and strategic alliances’ could well be the thrust in the year ahead.

The global market remains over supplied. And, unless scrap yards are worked to record levels in 2017 and steel prices increase, it is likely to remain so in the year ahead.

Global trade has not increased and indeed could slow if the new USA President’s stated policy of protectionism impacts US trade – imports and exports. Meanwhile, seeking economies of scale from an expanded Panama Canal, shipping lines continue to invest in new capacity. The global industry may therefore be hedging against falling freight rates by the end of the period.

This of course could stimulate trade. Indeed, Amazon and Alibaba may be depending on it.

Early in 2017, CMA CGM announced that it now allowed exporters in China to book container space on two of its routes using Alibaba’s ‘One Touch’ booking facility. Alibaba, the world’s largest e-commerce platform, has long offered foreign companies and consumers the ability to do business directly with manufacturers in China. However, container-load purchases had to be shipped out through a freight forwarder or carrier. With OneTouch, Chinese exporters can bypass the forwarder and arrange shipping directly through Alibaba.

It is understood that CMA CGM’s participation in OneTouch will be limited to container service to the Mediterranean and Adriatic area.

OneTouch service was then available for exports from eight ports – Shanghai, Ningbo, Shenzhen, Dalian, Tianjin, Qingdao, Xiamen, Guangzhou – going to some 40 destinations worldwide including Canada but not the USA.

Maritime experts in the Caribbean-Latin American region did not seem particularly perturbed about what 2017 had to offer. The perspectives gained from the various responses represented a mixed bag. It was felt that the results of the strategic mergers and partnerships implemented had not yet delivered results and that these could bring positive results.

Notably, there was no consensus around doom and gloom. Rather, there was an attitude of hope and positive expectation. Globally, ports that depend on revenues from cargo movement across its yards may have good reason to be cautious about the year ahead, having seen the drama that 2016 presented. However, in the Caribbean region, there is no abiding concern about 2017.

This year, 2017 is likely to be another bad year in regional shipping.

My expectations for 2017, given the realities of global shipping in 2016, are neutral.

Shipping lines are consolidating and new terminals are starting operations or completing construction.

We must adapt. Innovation is the word of the 2017 and going forward. BCO is booking cargo using Alibaba. Amazon is becoming a big logistic operator. Shipping lines are owning terminals in Latin America and the Caribbean. We must be flexible, like the bamboo, bending with the wind but never breaking. ______________

For shipping in general, 2017 may be slightly better in some sectors but overall not much change as against 2016.

Container sector will see some improvements in rates due to capacity decrease and consolidation. Liquid and dry bulk sectors are still in overcapacity, putting pressure on rates. The cruise sector will do well due to economic recovery of USA and European markets

Overcapacity remains in some sectors. The need for consolidation may shake up some markets.