Accessible bathymetry with no environmental risks

2017, November 1: Imagine that a port manager, within days and at low cost, is able to get access to an updated bathymetry map of the port and access channels for overview or for planning port development.

In light of growing numbers of tourists, ships and ship activities in the Caribbean region, the need for up-to-date, accurate and spatially dense environmental data becomes increasingly important.

Traditionally, getting bathymetric data for environmental assessments and coastal management required either large budgets or was entirely outside the scope of the projects because of high mobilization cost, rent of vessels and equipment and the number of people involved. It also exposed employees to health and safety risks. Furthermore, such surveys also have a negative environmental impact on aquatic fauna.

The technology facilitates an updated bathymetry for areas where only historical and outdated information exists. This is particularly true for shallow water areas that have changed significantly due to impacts from the hurricanes in the Caribbean region.

DHI has developed an approach for deriving shallow-water bathymetric data based on satellite data. By using state-of-the-art satellites and advanced physically based data-processing techniques, accurate bathymetric data can be produced at a fraction of the cost as compared to traditional boat-based survey data. The approach requires little or no calibration data. This reduces, significantly, the mobilization cost and turn-around time. There is no environmental impact on the survey areas. 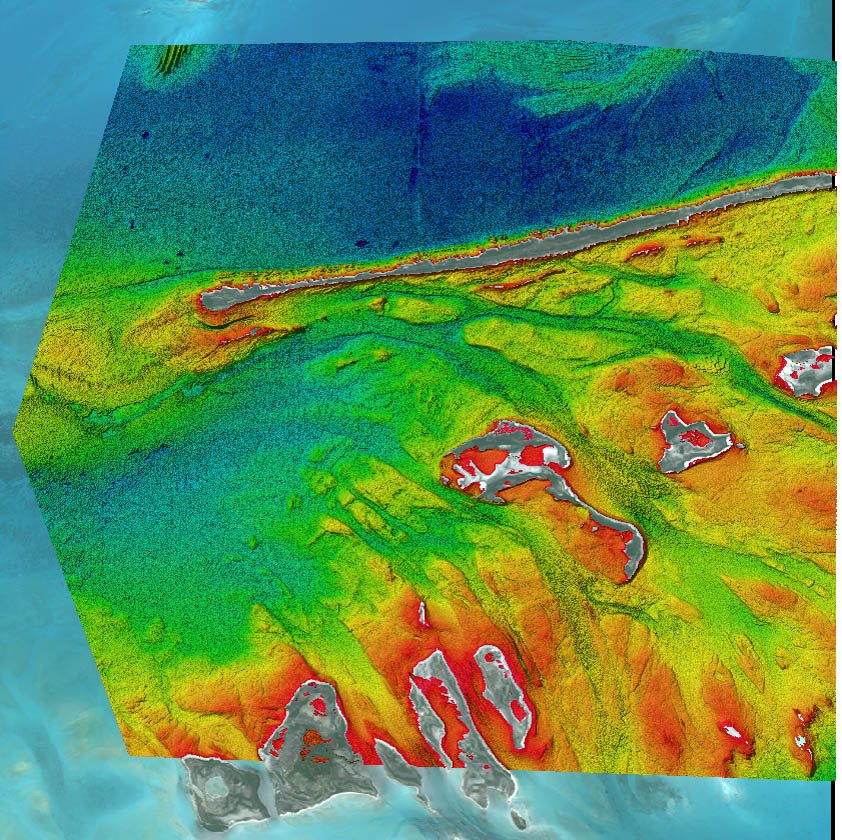 The approach is based on an accurate physical model for deriving bathymetry data from a variety of satellite systems. This provides a range of options for point spacing and spatial coverage: from local detailed mappings with a two-metre point spacing; to regional/national mappings with a 10 metre to 30-metre spacing.

This approach allows provision of reliable and consistent data in shallow waters, from the shore outwards, resulting in a dataset that has proven to be of immense help to environmental studies. Under ideal conditions reliable results down to a 30-metre depth are provided.

The low entry cost opens up the possibility for the data to be used by individual consultants, for ports checking the bathymetry in their access channels and for coastal development project done by the authorities.

The team behind the data portal is currently expanding coverage, to include strategic areas in the Caribbean and would like to hear which areas to cover. Get in touch with them at bathymetrics.shop.

By relying on satellite-based methodologies for mapping, the negative environmental impact associated with traditional surveys is removed. This is of utmost importance in vulnerable habitats such as coral reefs and sea grass patches, which are already under pressure from increasing acidity in the oceans; larger storms; and, more diving-related tourism.

Methods similar to the ones used for deriving bathymetry from satellite imagery can also be used for marine habitat mapping. A satellite-based marine habitat map is a unique data layer as it provides a synoptic snapshot of the conditions of a larger area at the time of satellite overpass. Furthermore, based on historical imagery, it is possible to go back in time and examine possible trends over time, in habitat conditions and distribution. Such overview of the habitats can provide port managers with a very valuable tool when it comes to planning development of ports. The advantage is that port managers can have the habitat and bathymetry maps in hand at the early planning stages.

Combining satellite-based marine habitat maps and satellite-derived bathymetry unlocks new possibilities for environmental impact assessments. Detailed information can now be made available, at relatively low cost, at the proposal stage of project. This allows for developments to be designed with the spatial environment as a central consideration from the beginning of the process, instead of being brought in late in the process once most of the planning has already been done.

The satellite-derived bathymetry methodology, the resulting data and its uses will be presented in detail during the workshop PMAC–Portside Caribbean Port Management Workshop, planned for Panama in January 2018. []