2017, March 1: On June 26, 2016, following years of what was described as the largest construction project in the Americas, the Expanded Panama Canal, with a project cost of approximately USD5.3 billion, opened its third set of locks to allow transit of the container vessel mv Cosco Shipping Panama.

The Chinese ship loaded with 9,000 containers entered the Canal on the Caribbean side and sailed into history to become the first vessel to transit the new Agua Clara locks. It was a ceremonial mission as the vessel was then deployed on a service between the Mediterranean and Asia and was off schedule, carrying mostly empty boxes. Heading for the Pacific Ocean, it was greeted with much fanfare, fireworks and waving flags as thousands of Panamanians and foreigners gathered to celebrate the historic passage.

The COSCO Shipping Panama set sail from the Greek port Piraeus on its way to Panama to make history. The Neopanamax vessel made the inaugural transit of the Expanded Panama Canal on Sunday, June 26, after a 14-day journey.  Panama Canal Administrator Jorge L. Quijano met with COSCO Shipping Panama’s Captain Jude Rodrigues and crewmembers prior to the ship’s departure.  Cosco Shipping Panama is a new vessel constructed and launched on January 2016.  The ship is 299.98 metres in length and 48.25 metres in beam, and has a container carrying capacity of 9,472 TEUs.

The ceremonies heralded a new era in global shipping. Just like the passage of the SS Ancon on August 15, 1914, (the American cargo and passenger ship regarded as the first to officially transit the Panama Canal), the transit of Cosco Shipping Panama last June marked the start of a change in trade patterns that is destined to have a positive impact on the Caribbean region and on global shipping. Indeed, this change is already evident.

By December 15, less than six months later, more than 500 Neopanamax vessels had already transited the Expanded Canal. And hundreds of vessels had obtained transit reservations for the coming months. 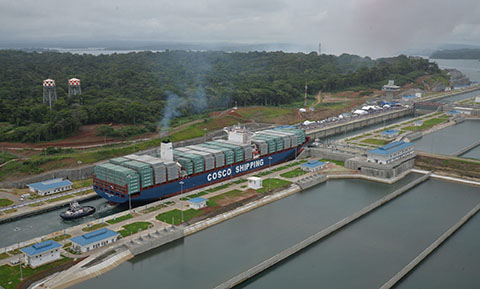 The biggest users of the expanded Panama Canal are containerships. They account for 47% of all traffic. Liquefied Petroleum Gas (LPG) carriers account for 22%. Other vessels using the expanded Canal include dry bulk carriers, vehicle carriers, tankers and liquefied natural gas (LNG) vessels, a new market segment for the Panama Canal.

These ships are benefiting from lower costs resulting from economies of scale provided by the larger vessels now employed.

At the beginning of this year (2017), ten Neopanamax liner services were using the Canal, operating ships of between 6,000 and 10,500 teu capacity. Most of these containerships were servicing the route that joins Northeast Asia with the East/Gulf Coast of the United States. Ports of call in the United States include Miami, New York, Norfolk, Houston, Charleston and Savannah. There were also Neopanamax ships deployed in the routes that join the West Coast of South America with Europe; and, Asia with the Caribbean. Some of these liner services include calls in Caribbean ports, such as Manzanillo International Terminal and Cristobal in Panama; Freeport in the Bahamas; and, Cartagena in Colombia, where they unload cargo for transshipment.

There is potential for a greater deployment of Neopanamax vessels in the Caribbean. However, that depends on the size and capacity of regional ports to handle larger vessels and, of course, on corporate strategy by shipping lines to use the Caribbean as a hub. Notwithstanding, expectations are for regional ports to experience an increase in feeder vessel traffic as a result of the bigger ships using the expanded Canal.

The Panama Canal Authority reported that, up to December 15, it had registered 139 transits of LPG carriers through new locks. Very Large Gas Carriers (VLGC) are moving LPG from terminals in the Gulf of Mexico to destinations in Japan, South Korea, Singapore and China. In addition, for the first time in its history, the expanded waterway is providing transit service to LNG vessels. These vessels were not able to use the original Canal because their beam dimensions exceeded the capacity of the Panamax locks. Voyages by LNG vessels originate at the Sabine Pass LNG Terminal in the U.S.A. and the Atlantic LNG terminal in Trinidad and Tobago and are destined to China, Mexico and Chile.

For many years, before and during the construction of the new locks, shipping experts have been discussing and debating the real impact of the Panama Canal Expansion on the Caribbean region. According to some early assessments, including that done by the Panama Canal Authority, the opening of the Expanded Canal is already having a positive impact on the wider Caribbean region, although this may not yet be felt by smaller ports. []