2019, November 1: Her majesty’s court in Falmouth commands the attention of disembarking passengers as they first set foot on Jamaican soil. It is one of the first official buildings in the Trelawny parish capital. Completed in 1815 and re-built after a fire in 1926, its Georgian architecture gives authenticity to Falmouth’s 18th Century history.

Authenticity is arguably the most valuable commodity in cruise marketing.

The falseness that sometimes characterises destination marketing does little to impress tourists and could become the focus of ridicule or otherwise earn the contempt of discerning travellers. The discerning are the ones that fill in post-trip service assessment and guest experience questionnaires.

Elsewhere in the Caribbean, there have been reports of less than complimentary utterances from cruise passengers who were welcomed on arrival and disembarkation with excitement, carnival musicians and colourful costumed dancers. But when they later returned to pier for boarding there was no sign of any such carnival activity having happened, drawing observations such as ‘carnival for tourists.’

Authenticity is truth. All else is false, fake or fabrication. And discerning travellers can tell the difference.

In Falmouth, the plan is to create an Artisan Village adjacent to the cruise port as a permanent feature of this Jamaican north coast destination. In that setting, visitors may freely interact with real skilled artisans engaged in genuine activities. And, the Jamaica government has indicated that it has plans for five such ‘villages’ to enhance its tourism product, while creating an outlet for indigenous creativity.

With financing from the government’s Tourism Enhancement Fund and implementation by the quasi-government entities Port Authority of Jamaica (PAJ) and the Urban Development Corporation, the Falmouth project was expected to be  up and functioning by the end of 2019. The US$5.7 million Artisan Village will have shops; restaurants and bars; food stalls stocked with local delights; and, there will be activities for children.

“It is going to be something quite unlike anything else in the Caribbean,” the PAJ head Professor Gordon Shirley said at the ground-breaking ceremony in March 2018.

The Hampden Wharf development will also involve the connection of the port area with the village; pavements using a mix of textures; walking paths and landscaping. And the planners promise ‘… a rich mix of retail and local eateries, craft and history’.

Development of this cruise destination has stimulated development of the historic town beyond the confines of the port. The Falmouth Streetscape Project, announced by the Jamaica government in 2014, was designed to repair and upgrade facades and surfaces on major streets in the town. Streets that were listed in this project included Harbour Lane, Falmouth Street, Market Street and Tharpe Street. The work involved repair and improvement to pedestrian paths and facades of buildings facing the port, as well as historic buildings along the trolley path. It also included resolution of vehicle parking issues.

Meanwhile, even as development works continue and Falmouth’s rehabilitation becomes increasingly obvious, the port is scoring well with its main users: cruise passengers.

Of 103 reviews of Falmouth (published on Trip Advisor’s ‘Historic Falmouth Cruise Port’ page), 36% rated the port as Excellent and 30% Very good. Of the sample, only 5% didn’t like the destination. This amounted to a four-star rating (of a maximum 5).

Travellers generally respond to TripAdvisor questionnaires shortly after the trip. At that time, great memories are yet to be fully transformed into reminiscences. Bad experiences, however, are still fresh and sore. In this recent TripAdvisor sample, seven of every 10 passengers rated the Falmouth ‘Excellent’ or ‘Very good.’

A walking tour of the property reveals some possible reasons.

With its open spaces and Georgian-style architectural themes, the passenger reception facility at the Falmouth cruise port is welcoming, guest-friendly and, in at least one aspect, empowering. If the roots of empowerment are fed by knowledge, understanding and empathy, then the tree-lined, brick-paved avenue that takes passengers in and out of the port complex is empowering for visitors and staff alike.

Visitors will therefore find, nestled between the Royal Palms, on both sides of the driveway, billboards, which together capture the history of the people on whose land they have just landed. Collectively, the dozen billboards present historical information about Jamaica and thus immediately infuses the visitor with a sense of entering a country and not simply stepping onto an island, as travel brochures often inadvertently suggest.

The billboard titles include: Arrival of Columbus’ First Ship, History of Falmouth, John Tharp, Jamaican Maroons, William Knibb and Emancipation, Free Black Society, Good Hope Plantation, Barrett Family, Henry Morgan, Governor of Jamaica, From British Colony to Independence and Usain Bolt. Each carried a simply written synopsis of the title in a single paragraph of just 100 to 150 words, presented in sans-serif small capitals.  The message was therefore gettable, enough for the situation and readily digestible. 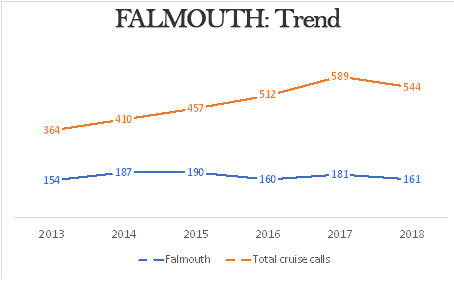 Access to the facility was fair. And small and major construction projects were in progress through the summer of 2019, and particularly in August when I visited.

The cruise gateway to a historic town that figured prominently in the enrichment and expansion of the British Empire, the Falmouth cruise port and Artisan Village offers not a flash mob reception for arriving cruise passengers but, rather, a meaningful shore experience in a truly authentic setting. [] 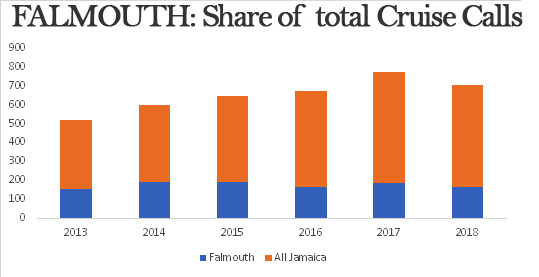