Operated by Island Global Yachting Ltd. (IGY), this gorgeous Saint Lucian property plays host to several international yachting events and is home to some of the most gorgeous seacraft to cruise the Caribbean. Events on IGY Rodney Bay’s annual calendar include a number of rallies promoted by the World Cruising Club, mainly The ARC*, ARC+ and World ARC in December. IGY also plays host to the Saint Lucia International Billfish Tournament in October and Mercury Weekend in August. 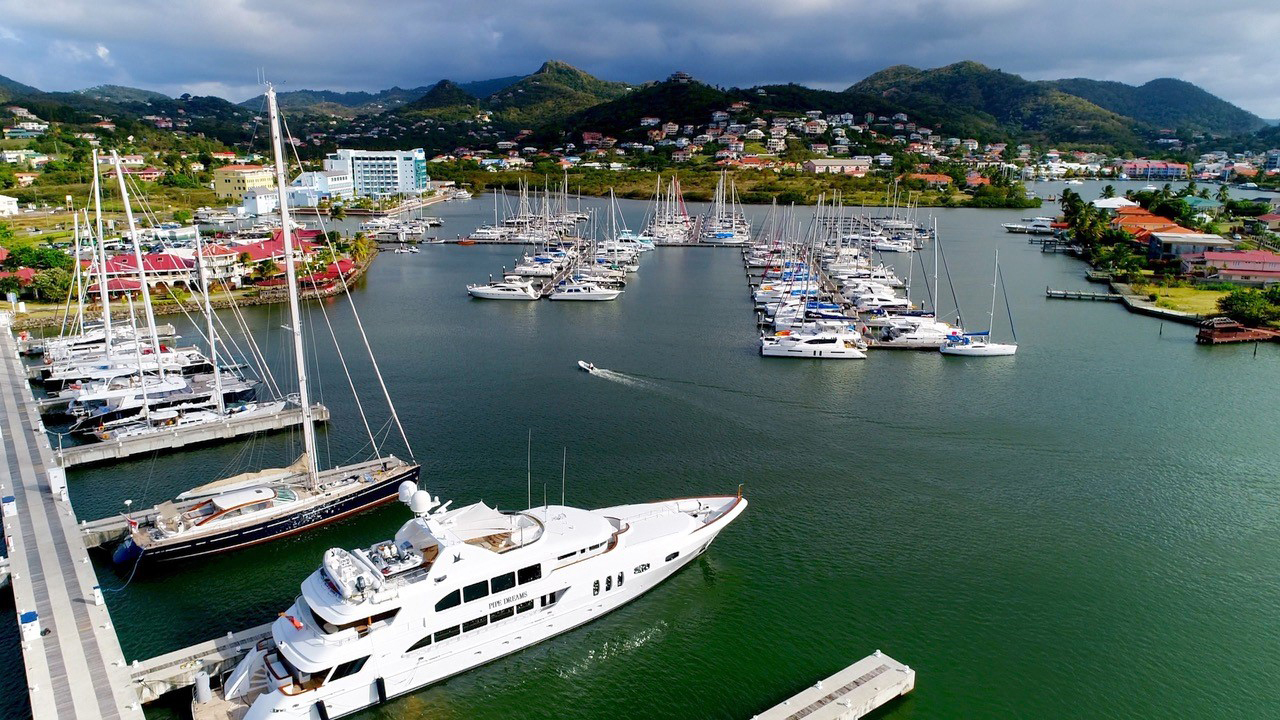 The challenging World ARC 2019 starts on Saturday January 12, 2019 and ends on Saturday April 11, 2020. The route takes participants from Saint Lucia southwards, through the Panama Canal, westwards across the Pacific through the Galapagos and Polynesian Islands to Australia then South Africa, across the South Atlantic to Brasil via St. Helena, then northwards to the Caribbean and back to Rodney Bay.

This is a cruising rally and so the use of engines is allowed. Up to 40 boats take part in this annual round-the-world event.

Participants have the option to make a full circumnavigation or, otherwise, sail half-a-rally. Boats can therefore be registered to join the fleet in Saint Lucia or in Australia. Those leaving at the halfway mark can register to complete the circumnavigation in a subsequent renewal of the event.

The ARC and ARC+ are comparatively much shorter events, from the Canary Islands to the Caribbean.

The ARC is considered an imperative by many sailors. Attracting more than 200 yachts and 1200 participants and volunteers each year, the ARC’s route covers 2,700 NM across the Atlantic from Gran Canaria to Saint Lucia.

The ARC 2018 begins on Sunday November 25 in Las Palmas. The award ceremony will be on December 22 at Rodney Bay. The 2019 edition will start out to Rodney Bay from Las Palmas on November 24, following the traditional programme of pre-departure activities, which begin on November 11, 2019. The ARC course record of 8 days, 6 hours, 29 minutes and15 seconds, is held by Rambler 88 and was set in ARC 2016.

The 2018 prize giving will be on Saturday December 22, 2018 when most boats would have completed the race. The average arrival time (wind permitting) is between 14-21 days.

The ARC Plus (ARC+ SLU) takes participants from Grand Canary to Saint Lucia via the Cape Verde islands. ARC + SVG will be inaugurated in in 2019, with St. Vincent’s Blue Lagoon Marina hosting the event.ARC+ St. Vincent and ARC+ Saint Lucia start from Las Palmas on November 20. The 2,150 NM sail to the Caribbean takes 12 to 16 days.

Sean Devaux, General Manager of the IGY Rodney Bay Marina, has witnessed at first hand the growing popularity of Saint Lucia as a yachting destination.  Saint Lucian by birth, he has led a team that has consistently delivered satisfaction to the discerning clientele that uses the marina’s facilities.

Rodney Bay is one of 16 marinas operated by the New York-based IGY, eight of which are in the Caribbean region. A hurricane hole, the marina covers approximately 17 acres and is one of the safest havens in the southern Caribbean. Its current capacity is 253 slips with maximum size of 255 ft. and maximum draft of 13.5 ft.

“We offer both European and American power, 50 hz and 60 hz. We are one of the few marinas in the southern Caribbean that offer this power option,” he stated.

“And, the marina offers delightful food choices, with restaurants serving up Italian, Thai and sushi, along with cafes offering healthy-heart choices.”

IGY Rodney Bay is home to Island Water World – one of the biggest chandlery chains in the Caribbean region, Mr. Devaux noted. Also, the premises boast laundry and fueling facilities, sail repairs, a supermarket, an electronics store, tour desks and a commercial bank.

“We are on the north-west of Saint Lucia so we are conveniently located near other activities including golf, kite surfing, tennis, gyms and squash courts and the Saint Lucia Yacht Club. We have also partnered with nearby hotels where guests get perks for being IGY clients,”  the General Manager added.

Discussing the capabilities of the adjoining repair and maintenance facility, Sean Devaux said that the Boatyard can haul up to 75 tons and handle vessels of up to 72 ft. (length overall), 11 ft. draught and 28 ft. beam. He listed available skills and services, including Volvo, Yanmar and other diesel technicians; and, welding, metal fabrication, fibreglass, painting and spraying, hydraulics, woodwork, sail repairs and rigging.

With a popular and well-managed marina catering and hosting a number of international events and activities, IGY Rodney Bay is clearly making a significant contribution to the local economy. It presents a positive image of the country to an upscale market and thus encourages growth in tourism. And it gives direct support to the local economy.

“The marina employs and directly supports between 150 and 200 Saint Lucians, through full time, part time and contractual arrangements. The money spent by visitors and clients at ground level go directly into the pockets of people and remains in the country. This includes the services and goods that Saint Lucians provide to boaters through tours, food and beverage, repairs, taxis, provisioning, vacation homes and other things.”

In the context of macroeconomics, he said the country earned through the importation and sale of boat parts, food supplies, fuel tax revenues and the many other revenue streams that flow through because of the marina. In addition, this asset apparently places little burden on the public purse.

“The marine infrastructure in Saint Lucia has demanded very little (by way of capital and infrastructural development) from government but instead, adds to the room stock in the country since most boats have two to three (rooms) per boat,” he stated.

IGY Rodney Bay is beautiful, spacious, well kept and safe, with a great food court and a homely, tropical ambiance. Small wonder that its popularity has moved it up on the list of preferred destinations, not just for international yachting events but also for cruisers who search for the ideal. []