Digitization of Latin American and Caribbean Ports for Increased Competitiveness

2019, November 1: According to the International Maritime Organization (IMO)1, over 90% of world trade is carried by sea and maritime shipping is considered the most cost-effective way to transport goods and raw materials in massive quantities around the planet. Ports are not only a crucial link to the global supply chain, but part of the national strategic infrastructure of any country; jobs are created both directly and indirectly from port activity, in terminals, shipping lines and land transportation, for instance. Whether it is trade on container ships, oil from tankers, or passengers from cruise ships, ports support larger, socioeconomic growth and play a decisive role in national development.

The maritime and port sectors can play a key role in the alleviation of extreme poverty and hunger as it provides an important source of income and employment for many developing countries, such as the supply of seagoing personnel and ship recycling, owning and operating, ship building and repairing, as well as port services, among others. Because of this, the maritime and port sectors demand state-of-the-art technology and infrastructure with efficient, environmentally sustainable, yet secure operations.

In this context, the Inter-American Committee on Ports (CIP) of the Organization of American States (OAS), the only permanent Inter-American governmental forum that brings together the National Port Authorities of all 35 sovereign nations of the Hemisphere, works with decision makers from the private sector to strengthen hemispheric cooperation for the development of a modern port sector. OAS support through CIP has been critical to member states’ efforts in achieving modern, competitive, sustainable, secure and inclusive ports, which contribute to national socioeconomic development. 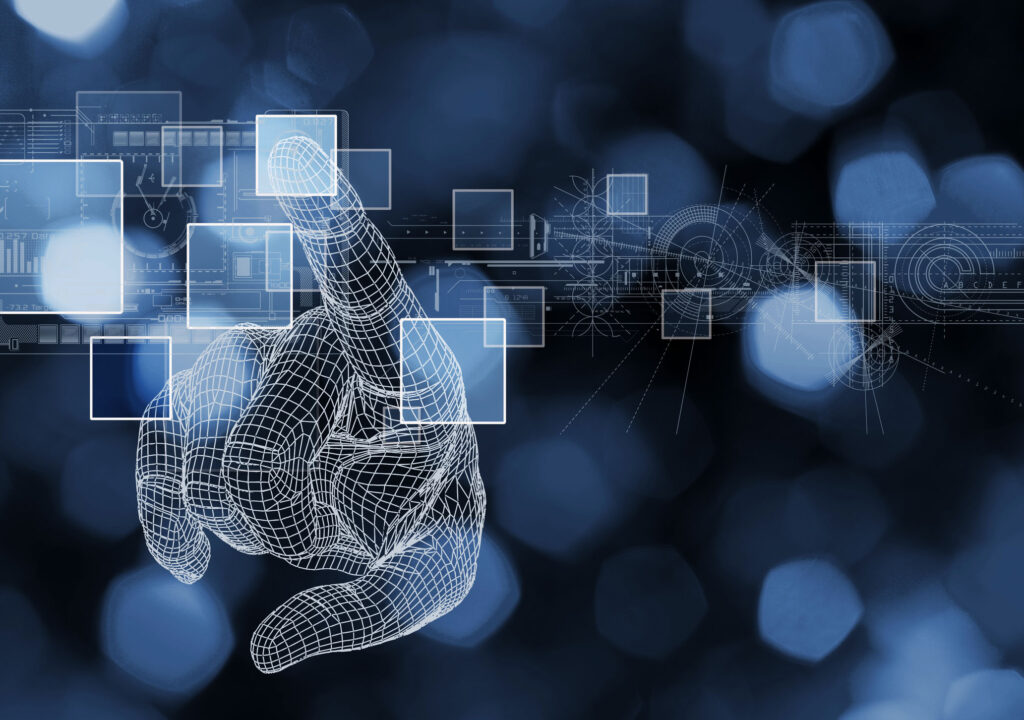 Driven partly by government policy, and partly by investment and participation of the private sector as a partner in development, Latin American and Caribbean (LAC) ports have begun a modernization process to allow them to successfully meet the challenges of global trade and, in the case of the Caribbean Basin, global tourism. This modernization, in turn, requires the update of many issues ranging from legislation and security procedures to automation and digitization of processes. This said, it is important to remember that there are vast differences in the degree of development among the region’s ports.

In this crucial endeavour of moving forward, especially in light of the World Trade Organization’s Trade Facilitation Agreement (TFA), the importance of modern port infrastructure for efficient logistics and trade cannot be understated. And an important part of that efficiency is process digitization. Since at least 2014, the Andean Development Corporation (CAF) and the Latin American and Caribbean Economic System (SELA) have been promoting the creation of a collaborative port network, and actively promote port digitization as government policy in LAC (top-down).

It is important to note here that digitization does not mean to scan the current forms and upload them to be filled online. It requires a redesign of the processes themselves so as to make them more efficient, taking advantage of the information technologies involved (less time and costs, ease of sharing data, for instance). But digitization is not enough. Having a single window is necessary, but not sufficient. Those aiming at becoming globally competitive must establish a port community system of which the single window is but a component. In a smart port, all procedures and processes of port stakeholders have been digitized and are interconnected. 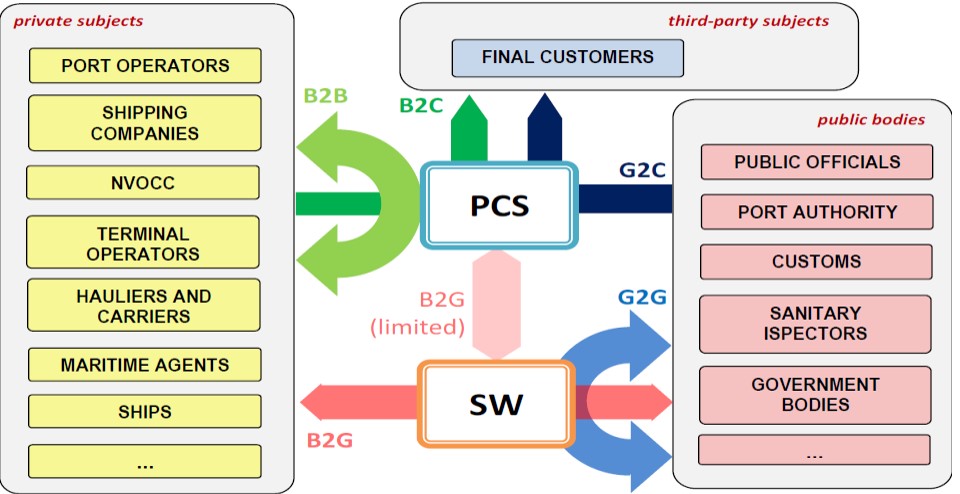 As the World Trade Organization’s Trade Facilitation Agreement (TFA) is being ratified by many countries for implementation, LAC must consolidate its third-generation ports and, ideally, work to have fourth-generation ports. First-generation ports are those that simply transport goods between land and sea, through a local or regional hinterland, without relation to the socioeconomic environment of the area. Second-generation ports, also called industrial ports, are transportation hubs and a centre for industrial and commercial activity. Services are limited to ships and goods. Third-generation ports incorporate logistics services related to the distribution of merchandise goods, data processing, and use of telecommunications systems, and help generate added value to goods and services. Fourth-generation ports are logistic platforms with security systems and communications at the highest technological level. Also known as networked or smart ports, they are integrated into intermodal transportation networks (door-to-door service), that is, all actors are interconnected.

Port activity has become increasingly complex with partners and stakeholders, which include, but are not limited to, shipping lines, terminals, customs and export agents, port authorities, land transportation firms, stevedores and storage, heath and agricultural authorities and of course, security components at every stage, just to name a few. For a smart port to be successful, these actors must not only digitize their procedures, but they need to do so in harmony with the other players or stakeholders of the port.

Smart-port technology is a digital multi-stakeholder system and actors can use these technologies to reconfigure functions and improve operations, reinventing how to get things done without major financial expenditures on new infrastructure.1

It is important to remember that these technologies go beyond IT services and system integration of a single actor. The benefits from implementing   smart-port technologies can have enormous impact. At the Port of Hamburg, e.g., plans to connect the port’s plethora of actors to reduce costs in operations and logistics will allow it to double in capacity, but not space, by 2025.2

To be sure, the ports of Latin America and the Caribbean are in the midst of a new phase of modernization aimed at allowing maritime and land transport to move towards new service standards, through reducing costs in the global supply chain and therefore, attempting to increase the competitiveness of their foreign trade. European and Asian experiences represent a path that goes beyond port reforms and the increase in maritime transport. They represent a path towards transforming ports and port areas into critical links in the global supply chain, where elements such as Foreign Trade Single Windows are but one element in a much larger port eco-system. In these more comprehensive digital smart ports, sustainability, productivity, customer service and low costs, are the new drivers of competitiveness for a globalized foreign trade. 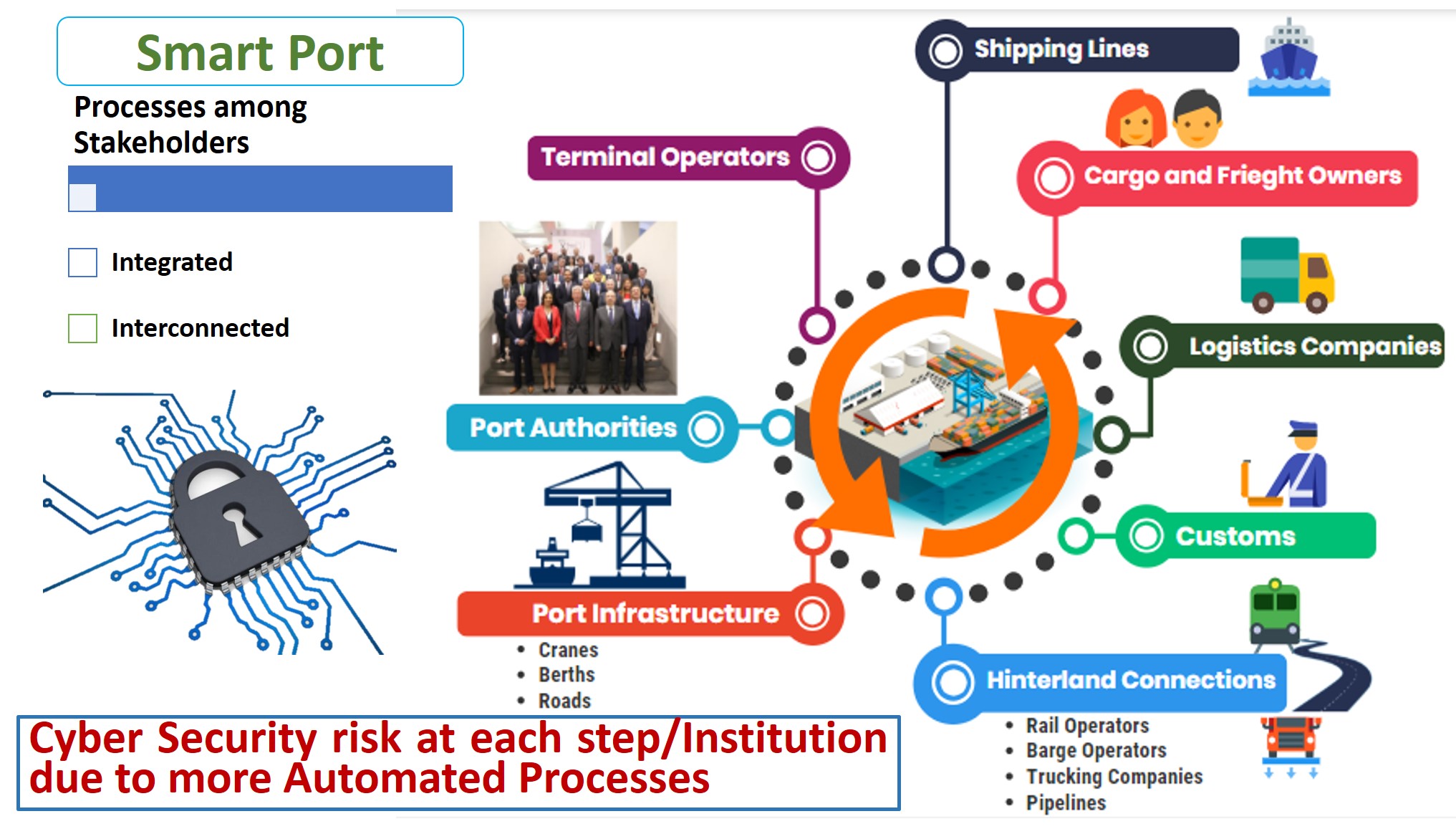 As can be seen in the Logistics Performance Index (LPI), LAC economies have structural problems, which limit their competitiveness, logistics performance and productivity. One of the main characteristics of the countries with a good rating in the LPI are strong institutions, and the use of collaborative information technologies, such as in a smart port. OAS LAC member states are undertaking their port modernization efforts under the aegis of larger medium/long-range development strategies, with objectives set for 2030, or even as far as 2050. Depending on their geopolitical situation, their objectives can be quite different.

Mexico, for example, has invested over US$5 billion in the last five years to double capacity to 540 million tons per year and to have state-of-the-art port facilities in both the Pacific and the Atlantic/Gulf, so that it can receive the mega ships; those that won’t even fit through the expanded Panama Canal (over 14,000 TEUs), and become a major shipping logistics hub. Connected through three interoceanic corridors, the idea is to add value to products while in transit, such as cars or electronics. These port and logistics modernization efforts all take into consideration smart-port networked technologies, even if at present they cannot all be fully realized. Mexican ports want to become regional hubs for re-routing and short sea shipping, and they want to do all this causing the least environmental damage possible.

But Mexico is not alone, countries like Panama and Colombia, with a coast on both oceans are real competitors to become a regional logistics hub. As of August, Panama launched an electronic system, which will concentrate all reception processes for ships. Panama already boasts the Panama Republic’s  Single Maritime Window (known as VUMPA for its  Spanish acronym), which requires all foreign vessels arriving in Panama to input their data through the system.

VUMPA has all documents requested from ship, crew, passengers and cargo in digital format, thus concentrating information and saving time and cost. Colombia is investing heavily in the development of a central waterway on the Magdalena River to reduce costs of moving cargo to the hinterland. Argentina, Bahamas, Jamaica and many others in the region have experienced a recent infusion of capital into the port sector. In all cases, the private sector is a fundamental partner for development accounting for between 70 and 90% of the financial resources. The Port of Kingston in Jamaica, in fact, boasts the only successfully implanted port community system in the Caribbean and Antigua and Barbuda have just begun implementing its single window with the support of the IMO and the Government of Norway. In yet another example, inland ports and waterways are critical in the Southern Cone.

Landlocked countries such as Bolivia and Paraguay depend entirely on barges and waterways to receive their goods from the global economy; Paraguay has, in fact, the largest barge fleet in the world. In this very particular market, Argentina, Brazil and Uruguay are also fully invested in inland ports and waterway transport as they stand to reap benefits, not only from domestic trade, but also from international trade. In keeping up with the global trends these, as well as other modernization efforts in LAC, all take into consideration environmental protection and process digitization.

That said, it is important to remember that in many instances, ports are at the mercy of federal or central government policies, which may or may not serve to facilitate trade. In other instances, the necessary modern legislation may be lacking as in those countries where, despite having their ports work towards digitization, they do not yet have laws supporting digital signatures or processes. These types of issues must be fully addressed in order for trade facilitation to work and for logistic costs to see a reduction. Independent of current port legislation in a particular country, in many of the region’s countries, the infusion of private investments in new infrastructure and modern port equipment has been essential to overcoming greater productivity needs in the maritime sector. The new challenges of enormous ships and high-load rotation have imposed new operational and inspection rhythms, which, in some cases, have led to congestion problems at the land interface of the ports. Therefore, the pivotal importance of public-private partnerships for development cannot be understated.

As we move forward, it is vital to remember the importance of adequately trained human capital. LAC countries are aware that all these investments require highly trained human resources to operate them and they are, appropriately, investing in capacity building. In this area, for instance, just in the last two years, the CIP has provided training opportunities for almost 500 LAC mid- to high-level port officials for certified training courses ranging from Masters’ degrees in multimodal transportation and logistics, or courses in sustainable port operations or cyber-security, to special training in much-needed themes like gender equality and social responsibility. In addition, more than 1,500 port officers have been exposed to best practices through eight CIP-organized Hemispheric Conferences on diverse topics.

Latin American and Caribbean ports continue to move forward with digitization so as to become more competitive. However, before they can achieve a regional digital port system and higher levels of technological interoperability, logistics integration, market adaptation and sustainability, they will need to respond to new challenges in port governance, technologies and trade facilitation. Like in other parts of the world, LAC’s medium- to long-term strategies must contemplate port legislation and regulation issues for infrastructure, technologies and trade practices that, in some cases, have not yet been invented or put into place. It is certainly a daunting task, but the governments of LAC countries, with the private sector as a partner for socio-economic development, are standing up and facing the challenges head-on. []

* Jorge Durán, is Chief of the Secretariat, Inter-American Committee on Ports (CIP) of the Organization of American States (OAS)

The views expressed here are the author’s and do not represent an official position by the CIP or the OAS.