2020 April 2: By removing large tracts of vegetation, humankind disrupted processes; induced erosion; and, exposed ground- and surface-water assets to accelerated evaporation. With the continuing removal of tree cover and the systematic denudation of tropical rainforests for economic reasons, large areas were increasingly exposed to direct sunlight. As a result, thousands of species, flora and fauna, have been displaced or forced into extinction. And the ability of Earth to absorb and convert carbon emissions through photosynthesis was imperceptibly, but substantially, impaired.

“Human activity, the consumption of fossil fuels, the acidification of the oceans, pollution, deforestation, and forced migrations threaten life forms of all kinds. It is estimated that one-third of corals, freshwater molluscs, sharks, and rays, one-fourth of all mammals, one-fifth of all reptiles, and one-sixth of all birds are heading towards extinction”1 – Elizabeth Kolbert

The unsettling aspect of these extreme-sounding predictions is that, as time passes, they increasingly appear to come true.

The contribution of plants and foliage to the process of absorption of harmful CO2 is undeniable. And the science that relates the natural aerosols released into the atmosphere by plants to cloud creation can hardly be challenged.

More trees and foliage to cover the Earth’s surface is clearly one solution of the complex of remedies and strategies that must be employed in the now-imperative process of correction, restoration and regeneration.

There is one material component that almost every commercial and residential building constructed in Barbados, particularly in the last half a century, contains: sand from the Walker’s Quarry. The fact is that this nation-serving quarry is all but depleted of its silica sand. And the dream of greening that massive mined-out sand pit and, in the process creating a food forest, is now well underway.

The 277-acre (about 92 ha.) property (of which about 140 acres were mined) is adjacent to Walkers Beach on Barbados North East coastline (in Saint Andrew) and is already undergoing a transformation as the months to cessation of mining operations approach. This could be as early as the end of 2020, depending on the demand for sand.

Already, barren tracks of sand have been transformed into green space and now support a rich variety of vegetation. Ponds have been already created, the plan being to create 14 such bodies of water.

The Walkers Reserve project was the only mining quarry regeneration project in the Caribbean. And so, when it started, there was no body of experience-based knowledge with which to plan. The process regeneration, turning Walkers Quarry into Walkers Reserve was therefore one of trial and error, research, observation and documentation. Indeed, Walkers

Reserve has become a laboratory for the study of flora and fauna regeneration.

The Walkers Institute for Regenerative Research, Education and Design (WIRRED) was established to implement the project. An initiative of the owners and operators of the quarry, the McNeel family, WIRRED was registered as a “… not-for-profit think tank, research centre and consultancy, dedicated to regenerative agroforestry practices.” It was charged with the responsibility of “… documenting, scaling and dissemination of the climate innovative work currently being implemented at Walkers Reserve”; and, since 2011, has been collaborating with local, regional and international consultants to develop the regenerative strategy of transforming Walkers Sand Quarry to Walkers Reserve.

WIRRED became immediately engaged in its project to dramatically expand ground cover and increase the amount of acreage under foliage. Its regeneration-of-life project, that is Walkers Reserve, included projects of community engagement. Projects to plant native species were studied. In this regard, ‘sea grape’, common to beaches across the Caribbean region, was introduced (or re-introduced) at the Walkers Reserve.

“Our intention is not just to ‘green’ or ‘re-wild’ the land, but to regenerate the land – applying interventions to the whole ecosystem that are best suited for the topography and (which) will enhance the biodiversity and build habitat,” said Kiesha Farnum, Managing Director of WIRRED. 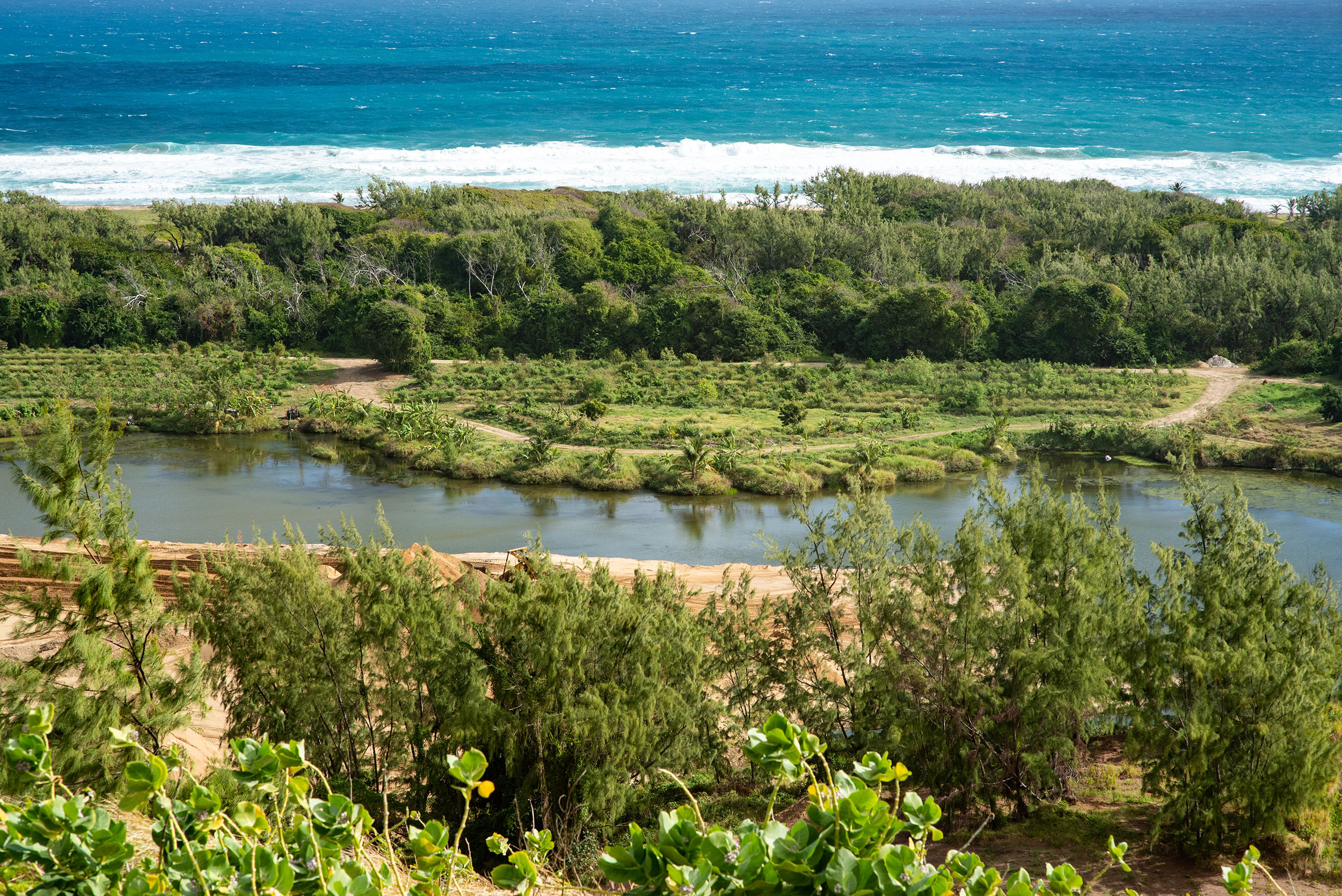 Sargassum, considered the dreaded floating death of beaches and a major threat to Caribbean tourism, was found to be a useful component for making mined-out and scarred land fertile and productive. Huge floating tracts of this brown algae have rendered many Caribbean beaches temporarily unusable… covering the sand with seaweed that is inches-deep and highly obnoxious.

“By us collecting a lot of seaweed and putting it in our compost and bringing it out to the site and spreading it out on the ground, we’re putting back a lot of the micro-nutrients that you’d normally pay a lot of money for if you had to buy it,” Erle Rahaman-Noronaha, Consultant, Permaculture Specialist at WIRRED explained.

The lesson: sargassum can create economic benefits and can be an important component for regenerating plant growth and creating productive land spaces.

WIRRED’s One Tree for Every Bajan project, aimed at restoring the fragile dune ecosystem of Walkers Beach, was launched in January 2019 with the specific goal of planting 285,000 indigenous trees.

The regeneration of life at Walkers Quarry and the expansive and ambitious objectives of WIRRED are regionally significant. This is a private-sector-led initiative that addresses development issues by engaging the wider community and collaborating with external and multilateral entities. Its work with respect to environmental initiatives is valuable at a time when this is most needed.

Sea ports are, by definition, coastal entities. They are conveniently located close to the largest population centres. As such, over time, port administrations form relationships with groups and organizations within their neighbouring communities.

Ports, through community outreach and development programmes, can inspire and launch environment protection projects and address the urgencies and priorities imposed by local situations.

Every citizen on planet Earth needs to be proactive and involved at this time.

Ports are corporate citizens and should be active in their communities. []