Scope for expansion at Port Castries

2019, March 1: A walk around the cargo section and the Ferry Terminal at Port Castries reveals order and organization. Essentially a domestic port serving a relatively small population, Castries is not in need of a large fleet of dockside equipment. That is clear. But the yards are in order, clean, and effectively managed; and, there is no congestion.

Most of the domestic cargo, for approximately 179,000 ‘Lucians’, come through this port facility; as do tens of thousands of passengers from neighbouring countries who annually use ferry services to and from Saint Lucia. 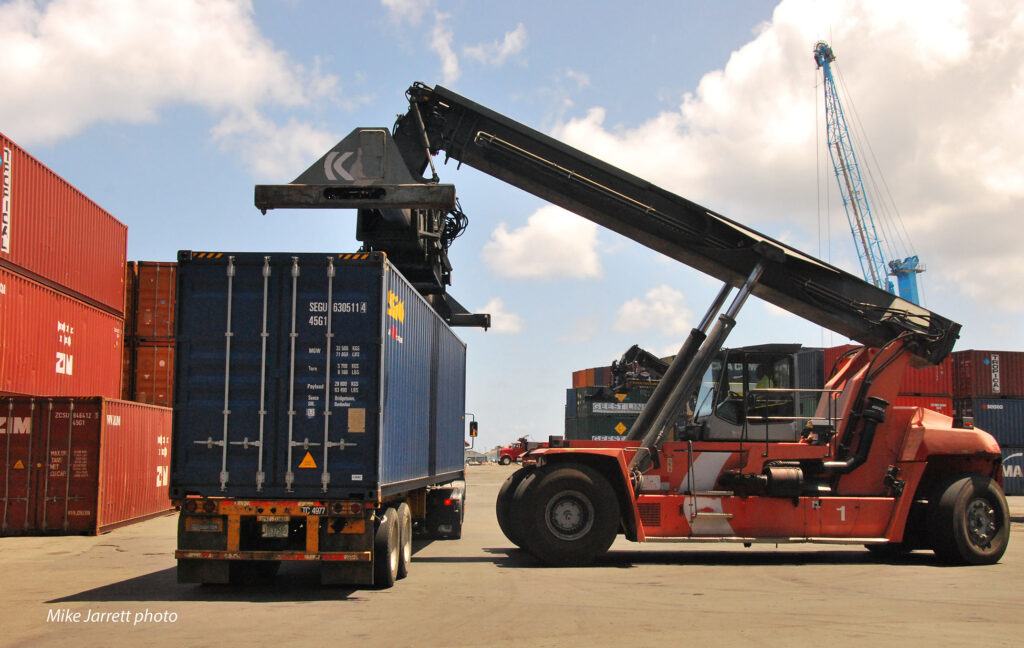 It may be too early to suggest that there is a growth trend in cargo volume going through Castries. However, the numbers are instructive. Six times in 10 years Castries has had a 30,000 teu/year and three of those were consecutive ‑ 2015, 2016 and 2017.

Castries has been receiving an average of 363 cruise ship calls every year in the 10 years ending in 2017. But in that year, 2017, it received the most cruise ships in a decade of operations when it logged a total of 461 cruise ship calls. Indeed, 2016 brought the fewest cruise ship calls in the period while the following year brought the most. Many cruise ports were crippled by the devastating hurricane season of 2017 and Saint Lucia apparently benefited.

On average about 637,000 cruise passengers experience Castries each year. But that mean has been exceeded in five of the 10 years under review. In the face of this steady growth and the record number of vessel calls in 2017, the Saint Lucia Air and Seaports Authority may soon need to address issues relating to expansion and upgrading of it cruise port facilities.

Domestic cargo growth is slow as it essentially reflects population growth and incremental expansion in the domestic economy. It may be bolstered, to some extent, by land-based (hotel) tourism but additional hotel capacity takes a long time to come on-stream. Growth in cruise tourism is however far more immediate and more dramatic in many respects and happens generally faster than it takes to plan, design and build a cruise port facility.

Cruise ports in expansion mode will find provision of berthing space quite a challenge and Castries is no different. With two cruise docks at the Saint Lucia Cruise Ship Terminal adjoining the Pointe Seraphine Duty Free Shopping Complex, cruise ships using the port have a tight manoeuvre to turn around so as to dock bow out.

Fortunately Port Castries has some possibilities for expanding its cruise ship berthing capacity just across the entrance channel on the south of the harbour in the Bananes Bay area, just west of the present cargo facility and south of Cocoa Nut Point. Given the port’s geometry, cruise ship captains should find berthing this area far easier and faster to get to as it apparently lines up with the 1,400-feet wide entry channel. As to whether there is enough depth that can be claimed to establish a third cruise berth at this location: the evidence certainly suggests that there is well over 30 feet of water in this undeveloped area of the port. And there is already a stand of mature palm trees in the area, as if waiting for such a development.

Saint Lucia is apparently enjoying increasingly popularity as a yachting and cruise destination. And Port Castries has the beauty, charm and space to exploit the opportunities that will now arise.

2019, March 1: The view from shore of the ship channel into the Castries port, looking westward into open (Caribbean) sea is totally different from one shoreline to the other. But even with casual oberservation it appears that the south side of Castries harbour offers opportunity for expansion of Saint Lucia’s tourism product.

View from the south shore: The view in Photo 1 is from the existing cargo docks on the southern side of the bay, a few hundred metres east of Bananes Bay. Standing on the existig docks, this vista  presents a straight-line view to open sea, devoid of obstacles.

Photo 2 is the view from the northern shore, near to the end of the runway of the George F.L. Charles local airport. In the distance, on the left of the channel entrance, is Tapion Rock. As can be seen in this line of sight, the locaation of this rock-island  influences the angle of approach that cruise ships would take to enter the relatively small harbour.

Docking on the south side, as it appears from this Photo 1 land view, would offer some manoeuverability advantages for cruise ship captains and also for the port as nearby Bananes Bay offers great potential for future growth development.

The established cruise port at Castries is located on the northern shore. []