The top leadership of both the AAPA and the GPAA attended the PMAC’s 19th Annual General Meeting in Nevis, June 22 to 24. Also represented were the Organization of Eastern Caribbean States (OECS), Caribbean Development Bank (CDB) and the Caribbean Shipping Association (CSA).

The PMAC’s strategy for development, set out in its Strategic Plan 2013-2017, established a number of goals for the five-year period ending this year, including:

Accordingly, in order to deliver on the required mandates, three implementation committees were formed and, regarding Goal 1, four major objectives were established consisting of the building of working relationships with government and public agencies; the creation of a mechanism to effectively communicate PMAC’s activities; establishment and maintenance of functional relationships with stakeholders and allied agencies; and, the expansion of membership in PMAC to include all Caribbean ports.

Work has continued steadily on meeting these ambitious goals and significant progress was made in the 2016 calendar year.

The objective to create a mechanism to effectively communicate the PMAC’s activities to a wider regional audience including governments and industry stakeholders was achieved with update of the PMAC website and the forging of an alliance with PORTSIDE CARIBBEAN magazine. This publication, which has proven to be an extremely effective tool in support of the PMAC’s strategic plans for development of the regional port sector, is now in its third year of publication. Its coverage of the issues, developments, trends and activities in Caribbean marine ports, with a high standard of journalism and editorial content and world standard production, has been impressive. 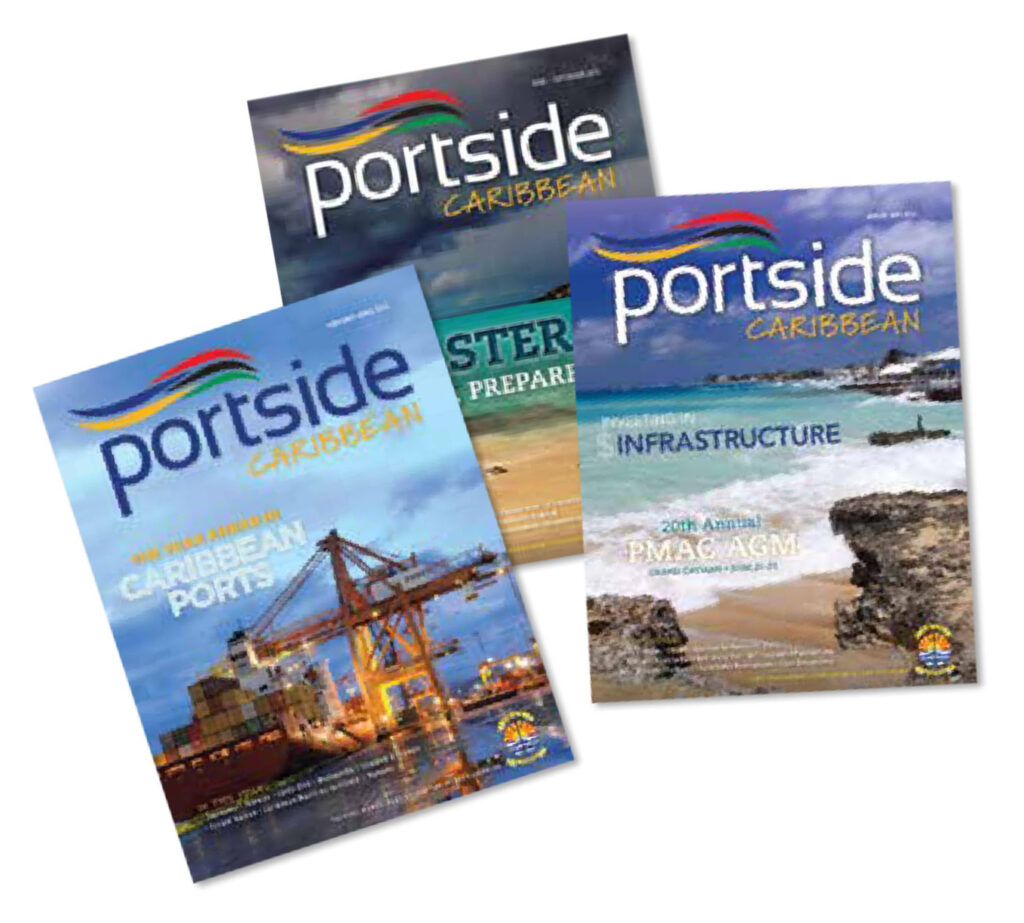 In addition to its coverage of regional ports, PORTSIDE CARIBBEAN has reserved editorial space for coverage of PMAC activities. In this regard, the alliance has assisted the Association to meet its goal of effectively communicating PMAC activities to governments, regional stakeholders and, through its electronic edition available on-line to a wider global audience.

The PMAC-PORTSIDE CARIBBEAN alliance will be taken to a higher level in 2017 with the proposal from its Editor and PMAC Resource Person, Michael Jarrett for a Caribbean Port Management Workshop, an annual event for Caribbean port managers, port authority decision-makers and other functionaries and stakeholders in Caribbean maritime affairs. The target audience includes Permanent Secretaries and other relevant personnel in Ministries of Government; PMAC’s strategic partners: AAPA, GPAA, CSA, Inter-American Committee on Ports (CIP) of the Organization of American States (OAS), Organization of Eastern Caribbean States (OECS), Association of Caribbean States (ACS), and observer institutions such as the CDB and Inter-American Development Bank (IDB).

This annual Caribbean Port management Workshop will provide participants with a ‘nuts-and-bolts’ forum for learning and for addressing a range of port development and sustainability issues. It will feature hands-on sessions from industry experts and content is being planned in collaboration with the Caribbean Maritime University (CMU). Plans for the inaugural event to be held in December 2017 with the theme Sustainable Development of Harbours, are now at an advanced stage, and will be announced prior to the PMAC AGM in June.

As regards the objective of expanding membership to include all Caribbean ports, PMAC’s membership has increased significantly and now stands at 15 member ports. The Associate Members group has also increased in size to 18 companies. Meanwhile, PMAC Ambassadors have been in informal discussions with representatives of a number of entities that are not presently members of the Association.

Goal 3 of the Strategic plan addresses the creation of a network to identify and enable best practices in port operations. In this regard, the PMAC’s Memoranda of Understanding with the AAPA, the GPAA and the CSA help to facilitate the achievement of this goal.

Collaboration with the AAPA was taken a step further in 2016 with the appointment of the PMAC Executive Secretary as Chairman of the AAPA-Caribbean Delegation at the Annual Conference in October. Accordingly, in this capacity, I attended the AAPA Board of Directors meeting in December last.

Goal 4 speaks to training and certification and the PMAC has been active, working in collaboration with its Associate Member, the Caribbean Maritime Institute. In October the Association collaborated with the Suriname Port Management Company to put on a course in Crisis Management in Paramaribo. This event was successfully delivered.

The AAPA continues to allow access to PMAC members wishing to participate in its webinars. Although a major benefit to PMAC members, response to this valuable tool for upgrading knowledge and skills has been disappointing. Consequently, topics of specific interest were solicited and received from PMAC member ports, for AAPA’s consideration. The year ahead will see the PMAC move even further along the path to completing goals set in its Strategic Plan 2013-2017. Relationships with all partners in our expanding network of regional organizations will be further consolidated as the PMAC continues to grow in size, strength and influence. []

* Glenn Roach is Executive Secretary of the Port Management Association of the Caribbean and Chairman of the AAPA Caribbean delegation.