Port Lafito started operations with two Liebherr LHM 420 mobile harbour cranes, the first of their kind in the Caribbean. With 124 metric tonnes maximum load capacity (with 35.8 load capacity on the hook at 48 meters radius), the Liebherr cranes can produce over 30 moves per hour. They are diesel-powered units with high-energy efficiency. Their remote wireless monitoring tracks system status and key statistics, including regular alerts that allow the operations team to maintain rapid crane uptime.

The GB Group is a leading, diversified group of industrial and trading companies in the Caribbean, with operations concentrated in Haiti, Dominican Republic, Jamaica and St. Maarten and offices in the United States. The group comprises 21 companies in seven different divisions: agriculture, construction, consumer goods, infrastructure, energy, logistics and trading. It employs more than 4,000persons with managers from more than 15 countries. Port Lafito is a part of the group’s $200 million Lafito Global project. 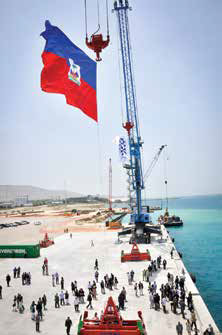 Port Lafito, the deepest port in Haiti, started life with 12.5 metres of safe draft and 450 metres of berthing. A second phase of development will increase lateral berthing to 900 metres. Similarly, the quay side terminal is to be doubled in area from the present 130,000 square metres (13 hectares) in the second phase of development. In addition, it has a dry terminal in the capital city of Port-au-Prince.

The inland terminal, already in operation at Chancerelles, right in the heart of the city’s traditional industrial sector, is a 5-minute drive from the Port-au-Prince International Airport. It has 50,000 m2 of yard space and 30,000 square feet of customs-bonded warehouse to handle in-bound LCL containers as well as LCL export shipments to be consolidated or palletized as air cargo when required. It also has Customs clearing facilities.

Agreements have reportedly been finalized with Evergreen Marine and King Ocean Services to include Lafito as a port of call.  In addition, an international sister seaport agreement was signed between Port Lafito and the Port of Miami in order to collaborate on the exchange of information and ideas, with the aim to increase cargo and trade between ports.

“Port Lafito will breathe new life into Haiti by creating new jobs, training for skilled labor, and encouraging foreign investment and development. This project will make a significant impact on the national economy and have a beneficial impact on the more than 10 million people that live here,” said Reuven Bigio, CEO of GB Group. “We are proud to announce that the day has come where we can help bring Haiti to the forefront of modern logistics. None of this would have been possible without the support from our public and private partners, for which we are very grateful.” [] 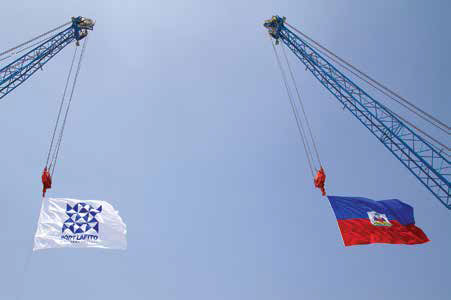