Forty eight hours before President Barack Obama’s historic two-day visit to Cuba in March 2016, the Cuban government entertained another head of state. Arriving at midnight and with local attention on the final preparations for Obama’s visit, Venezuela’s Nicolas Maduro’s intention appeared to be a more than gentle reminder that before the thaw in relations between Havana and Washington, Venezuela had been a pillar of economic and diplomatic support for Cuba.

Maduro’s visit was, understandably, short. He had to leave before the U.S. President arrived. But almost overtaken by the attention on the US president’s visit, Maduro made his point to the Cubans and also reminded that, while relations between the USA and Cuba were improving, Caracas was subject to sanctions imposed by Washington and which Maduro considered to be unjust.

The two visits in March placed Cuba at the centre of an economic and diplomatic struggle between the USA and Venezuela that intensified during the presidencies of George W. Bush and the late Hugo Chavez. Washington said in March 2015 that the Venezuelan government’s restrictions on the press and the detention of dissidents were violations of human rights that posed an “extraordinary threat to the national security and foreign policy of the United States.” It imposed sanctions on several well-known Venezuelans but Maduro described the criticism as support for a possible coup against him.

The timing of Maduro’s visit was not coincidental but Cuban officials say Maduro was unsuccessful in getting President Raul Castro to raise the Venezuelan’s concerns with Obama. Such a discussion “at this time would be diplomatically incorrect and uncomfortable, and was not on the agenda” for Obama’s visit, they said.

Notwithstanding, Maduro was successful in reminding Cubans of the help Venezuela has been giving their country and promised that this would continue, regardless of what would come out of the rapidly improving relationship between Havana and Washington. Maduro attended a meeting of the Venezuela-Cuba Joint Commission that oversees economic relations between the countries, and a statement issued after said both would maintain close political and economic ties, supported by an agreement to continue existing economic agreements until 2030.

“These are times of renewal and brotherhood,” Maduro said as he left Havana.

Relations between Cuba and Venezuela are based on “emphatic, unimpeded and full solidarity with Venezuela,” Cuba’s foreign minister Bruno Rodriguez responded.

Venezuela’s support for Cuba has been based significantly on preferential arrangements for oil and oil products, as well as plans to assist with expansion of the country’s oil refining capacity. Cuba has been repaying Venezuela with a range of specialised services for the public sector, mainly doctors and nurses, while the plans for the refineries have been stalled. Maduro’s intention was also to reassure Cuba that there would be no sudden disruption of oil supplies, despite the deteriorating condition of Venezuela’s economy and pressure from the opposition (that controls the legislature) for the scrapping of preferential arrangements between both countries. 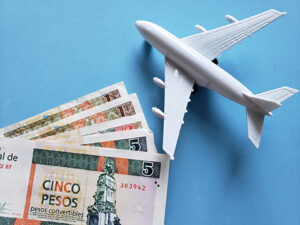 While Castro would have been comforted by Maduro’s promise of continued support, the Cuban leader was clearly making the most of the improvement in relations with Washington. But a very significant development in the thaw preceded the ceremonies during Obama’s visit. Cuba and the USA signed an air services agreement in February that will allow up to 110 daily commercial flights by US airlines to Havana and nine other cities. Cuba is willing to increase the number of flights if the US requests it, according to a US statement on the agreement. Tourist travel from the USA to Cuba is still barred under Washington’s embargo. However, the air services agreement will open Cuba’s tourism market in the USA.

The agreement covers “aspects of operational security and aviation in an atmosphere of mutual respect and reciprocity,” Cuba’s transportation minister Adel Yzquierdo said. Cuban airlines will have to apply to the US government for permits to fly to the USA, but US airlines are lining up to get into this potentially lucrative market.

Foreign hotel chains are preparing to take advantage of Cuba’s plan to expand room capacity by a third to 85,000 by 2020 in order to meet increased demand from US visitors. The island-state has 63,000 rooms and has been short of capacity to meet the volume of visitors it has been getting from Europe and Canada over the past 20 years. Cuba received a record 3.52 million visitors last year, up 17.4% from 2014. (By comparison, Jamaica had just over two million visitors, after a 3.6% increase from 2013.) And the number of American visitors arriving in Cuba increased 77% to 161,000, not counting hundreds of thousands of Cuban-Americans who have been allowed to return to visit their families.

“While the Cuban government will take heart from Venezuela’s undertaking to continue what has been a lifeline for the island’s economy, the sight of thousands of American tourists in Cuba will be a more telling indicator to ordinary Cubans of significant developments in foreign policy,” according to a Caribbean diplomat in Havana. “If this were a public relations contest – and, diplomatically, it is something like that – the Americans would be winning very easily.”

President Obama has made improved relations with Cuba one aspect of his legacy. “It is time for us to look forward to the future together,” he said in Cuba.

“It will not be easy and there will be setbacks. It will take time. But my time here in Cuba renews my hope and my confidence in what the Cuban people will do. We can make this journey as friends, and as neighbours, and as family, together.”

Obama met several Cuban dissidents. He did not meet with former president Fidel Castro who has not been happy with the US president talking with the government’s opponents, and with the rapid changes in relations between the two countries. Fidel Castro is still influential, particularly among older Cubans, but his rejection of the détente between Havana and Washington (“We do not need the empire to give us anything.”) is unlikely to affect the pace and nature of the ties between the USA and the country that he led during more than 50 years of uncomfortable and strained relations. []

*Canute James, PhD, Adjunct Senior Lecturer and former Director of the Caribbean Institute of Media and Communication (CARIMAC), Mona Campus, University of the West Indies, was a reporter for the Financial Times of London and radio reporter, presenter and producer in London, England for the BBC.