Barbados cruise: Opportunities and potential, yet concerns and uncertainty

2018, November 1: There is anguish, fear and uncertainty in Barbados, depending on who you talk with, about the current state of tourism and the country’s cruise ship business. The voiced concerns reached near climax this past summer with Barbadians, from the Minister of Tourism, Kerrie Symmonds to vendors and taxi drivers at the port, in unison.

“The situational analysis having been completed, I am now in a position to say to you that it reveals that the cruise sector in Barbados is in a state of very deep crisis … In my view, unless imminent and immediate and fundamental alternatives are put in place, we are confronting ourselves with catastrophic failure,” Symmonds reportedly said.

The vendors and taxi drivers at the cruise port are reporting that tourists were “… tired of what the island has to offer.” Their observations were apparently supported by a 2014 report by the Business Research and Economic Advisors (BREA) which showed a major decline in visitor satisfaction. Barbados, ranked 10th in visitor satisfaction in 2008, was ranked 24th in 2014.

The tourism minister announced that a National Cruise Development Commission was to be established during the following month (September 2018) with a mission to overhaul the industry. Meanwhile, concerned vendors and taxi drivers are pushing to be included in the discussions regarding plans to upgrade, expand or re-design facilities and attractions.

On August 11, the tourism minister told Barbadian news media that, despite the increasing numbers of arrivals, the cruise sub-sector was experiencing decline in business. He reported that cruise passenger spend in Barbados had declined over the past decade. Indeed, the Caribbean Tourism Organization reported that average passenger spend in Barbados in 2016 was USD60 but had further declined to USD58 in 2017 despite an increase in arrivals of just under 13% during that period. Barbados received a record 818,752 cruise passenger arrivals in 2017.

However, the manager of The Boatyard at Carlyle Bay, Sean DeFreitas, disagreed with the Minister’s assessment. He acknowledged that there were problems but argued that it was not accurate to say the cruise sector was in crisis. He felt it incongruous to acknowledge a record in passenger arrivals while at the same time arguing that there was a crisis in the sector.

Cruise ships will continue to come, no matter the new technologies and on-board attractions. Beaches and the culture of a people cannot be duplicated on a cruise ship, he said.

“If we have as many as 800,000 plus cruise ship passengers arriving, we have a great opportunity to convert them to long stay visitors,” he said during a panel discussion broadcast* in Barbados in August.  [* Brass Tacks Sunday, on Starcom Radio Network, Sunday August 19, 2018.]

The discussion, which covered a range of issues about progress and development of the country’s cruise business, was highlighted by the following points made by various members of the panel: 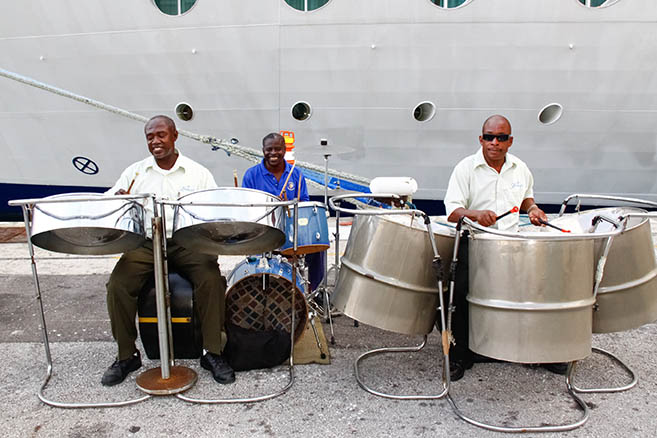 * Concern that cruise ships had become “… a full-fledged destination in and of themselves” and in this regard were themselves a challenge or competitor for the visitor’s interest which the ship was in port.

* Concern about lack of authenticity of the shore experience and particularly (what was described as) ‘staged authenticity’, where an event or performances are staged specifically for the arriving visitors.

* Barbados should not unilaterally increase the head tax (charged for passenger arrivals) and still expect to be competitive. Caribbean destinations should collaborate, especially with respect to the ‘head tax’.

* If the port is shut off from the local society, this limits the variety and authenticity of what that port has to offer its visitors. The programme’s moderator introduced a recording of an interview with a crew member of a cruise ship, who said: Cruise ship crew members ashore in Barbados are bored. The port is restricted and crew go ashore but remain in the port area when they return every two weeks. There is nothing for them to do but drink. So, after a few visits, some end up not getting off the ship because, apart from drinking, there’s nothing to do, he said.

* Average spend of tourists in Barbados was lower than the regional average. However, it argued that average spend was also a function of where a destination was positioned on a line’s itinerary. Destinations that are highest on the list of ports on an itinerary tend to get a higher spend relative to those on the lower end. Barbados, because of its geographical location, is lower down on the itinerary (4th or 5th) and therefore records a statistic that is slightly below the regional average. More shopping is done when your pocket is full, as one panel member noted.

* Caribbean cruise destinations should not present attractions and activities that are available elsewhere at the expense of exposing that which is unique to the Caribbean.

* Education and public awareness are important for ensuring that visitors have a meaningful and pleasant shore experience. More than 60% of the country’s export revenues are derived from tourism and about 40% of the workforce is directly or indirectly involved in tourism. Public Awareness Programmes on local media was therefore recommended to stimulate behavioural change which will ultimately contribute to visitors having a positive experience.

* Satisfying a market requires understanding that comes from study. Individuals who travel as tourists have changed. The indicators and profiles that previously defined that market have changed. The demographics are different and so new studies have to be done. Unique experiences must be designed within the context of the new and varied interests of visitors.

* In addition to expanding and improving the shore experience, there is need to increase the time that ships spend in port. “Increasing average spend cannot happen if the ship is sailing to somewhere else,” as one panel member said.

* Attractions and planned activities ashore need not be exclusive to cruise passengers but should be planned with the idea of including (and thus extending the benefits to) stop-over /long stay visitors, thus expanding and maximising the returns on those investments.

* Local dominance and control by large companies was identified as a threat to variety and diversification.

* Questions arose about results and financing. Is development funding earmarked for the sector being put in the right places; spent wisely; and, bearing results? Is money spent on planning or attending industry conferences well-spent; are the right people being sent; are negotiations at annual events, such as Seatrade and FCCA, being done and are they bearing results.

It was felt that the Barbados cruise industry had great potential and that it presented the country with untold economic opportunities. One panelist said: We have 800,000 persons coming every year without us having to pay to have them brought here. They are sitting on our door steps. They are right here. What are we doing? []